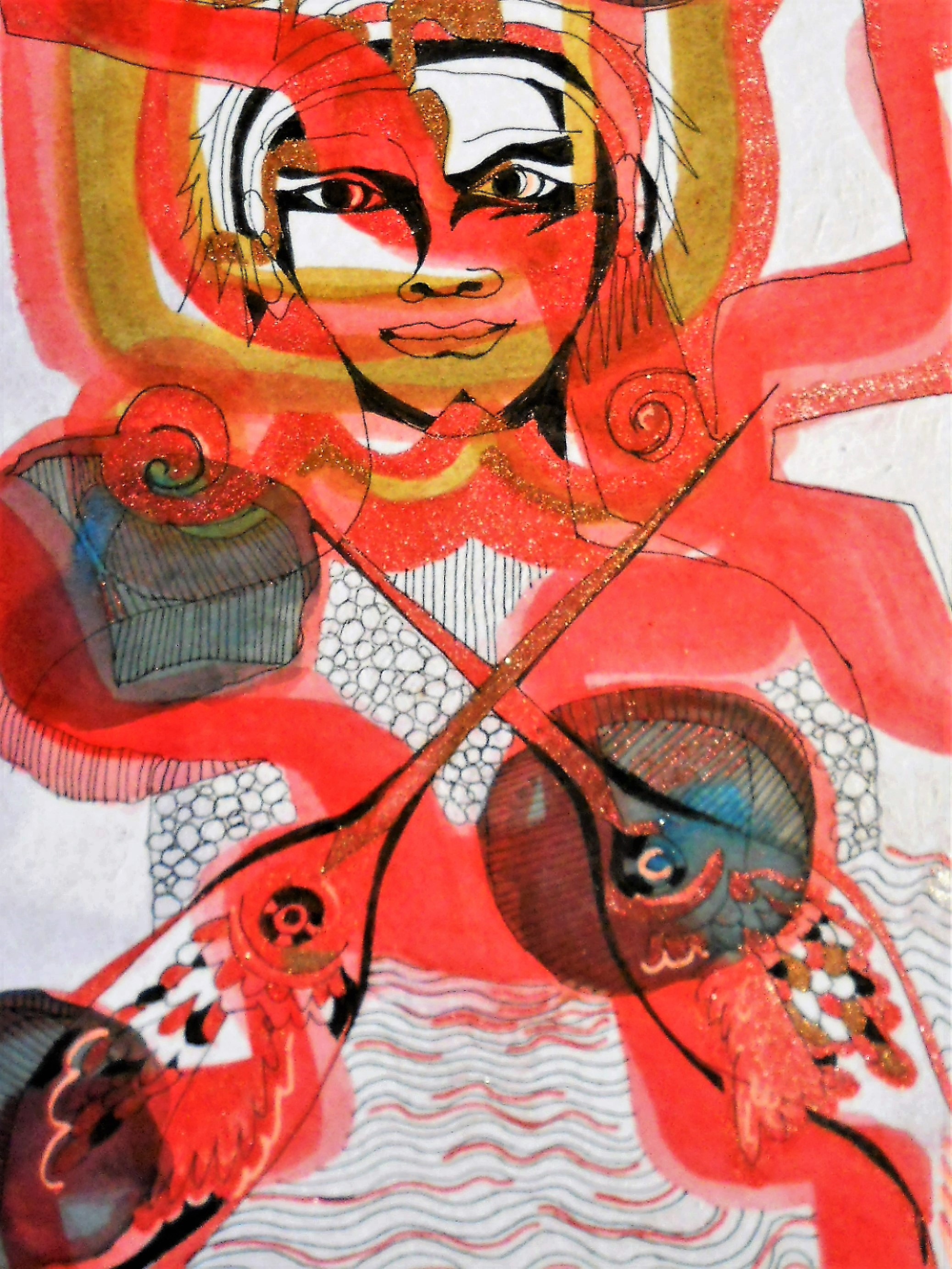 [Note: these artworks are part of Life Force Arts Center’s exhibit Art: The Language of Healing which runs May 13 – August 22, 2017] In a time when human beings are suffering from a host of illnesses caused by stress and modern-day living, the need for ancient wisdom has never been more important. In fact, many people have become tired of the side effects caused by pharmaceutical medicines and the lack of care shown in mainstream medical facilities and are turning to traditional treatments.

The Mayan civilization developed healing systems that have influenced holistic healthcare to this day.

The Mayan civilization originated in Guatemala around 2600 BC and rose to prominence around 250 AD in present-day southern Mexico, Guatemala, northern Belize and western Honduras. The Mayans excelled at agriculture, pottery, hieroglyph writing, calendar making and mathematics, and left behind an astonishing amount of impressive architecture and symbolic artwork. The Mesoamerican civilization may not have survived, but many of their secrets to good health, healing and living well are still alive to this day. The nawals are my main theme because as a Guatemalan artist, because they are powerful Mayan spirits or totems assigned by the Tzolkin calendar to each day of the Mayan year. Your nawal is assigned to you at birth and has a heavy influence on your character and demeanor much the same way the zodiac does. Each nawal is associated with an animal of importance to the Maya as well as associated traits, qualities and tendencies.

Tijax means blade and rock of obsidian. It is the day where suffering is cut. Sword of wisdom and purification, sacred knife, this nawal is represented by the swordfish.
People born in Tijax can be good healers.

Tz’ikin is the intermediary between God and man. It is the intermediary between Mother Tz’aqol, Father B’itol. And human beings. It is the intermediation between Ajaw, the Great Father, and human beings, represented by everything that exists in space: air, clouds, cold, and heat-powers that Heart of Sky created to help us. It represents the sacred vision. This sign brings good relationships. Tz’ikin provides magnetism and is the perfect day to negotiate, particularly in love and business. It is a special day for increasing intuition and vision. Eagle, condor, quetzal and butterfly are its symbols.

E’E symbolizes the path of destiny, travel, the road of life, the guide, and the means. The how and what of the journey called life is the energy of action; that which moves us toward a precise objective, it is the part of life that searches for realization in every situation and aspect in life. E’E provides action. It is intermediation, it is the search for what is new yet similar between different visions, and it brings an innate, innovative strength its symbol is the Wildcat.

K’at represents instinct and originality, but also the tangle of life, the things that trap us. It’s a force that connects people or elements to get things done and a filter that separates the bad from the good. The seed symbolizes the possibility of new life. At its essence, it is a fire that consumes, the absence of physical, mental, emotional or spiritual freedom. It’s a day to untangle, to untie the knots that tie us to our vices. A day to ask for abundance and to pray a woman’s fertility. A day to get away from negative energy and bad influences, to fix problems of love and soothe one’s emotions. Its symbolic animals may be the lizard and the spider.

B’atz’ is the start of life, infinite time, and unity. Spiritual connections are history interwoven with time. This sign symbolizes cosmic phenomena and original wisdom. B’atz’ is the diety that created Earth and Sky, the Creator of life and wisdom. This sign symbolizes time unraveled, evolution, and human life. The Maya depict time as a thread wound around a giant reed underneath the Earth. This thread is unraveled as time goes by. History is woven from time. Its symbolic animal it is the monkey.

Milagro Quiroa Fernandez creates art as a healing medium, a way to heal the spirit, the mind and body.  She holds a degree in Visual Arts from the University of San Carlos, Guatemala, and studied Graphic Design and Architecture at the Rafael Landivar University and Anthropology at the University of San Carlos, in Guatemala. Milagro’s career as an artist began in 1979 with an individual exhibition at the School of Plastic Arts. She has has 32 individual exhibitions and participated in more than 43 collective exhibitions of painting and drawing in Guatemala, El Salvador, Mexico, United States and China. She illustrates books, literary magazines and posters; her artwork is the image of the V Latin American Congress on Sexual and Reproductive Rights in May 2010. In 2008, she published a book with her artworks, The Daughter of the Nawales. She is a Postgraduate of the Velázquez Prize of the Plastic Arts in Madrid (2006); also awarded the artist of the year Medal in fine arts (2007) by that organization.