“Art: The Language of Community”: reflections on the art exhibit by Aura Chapa 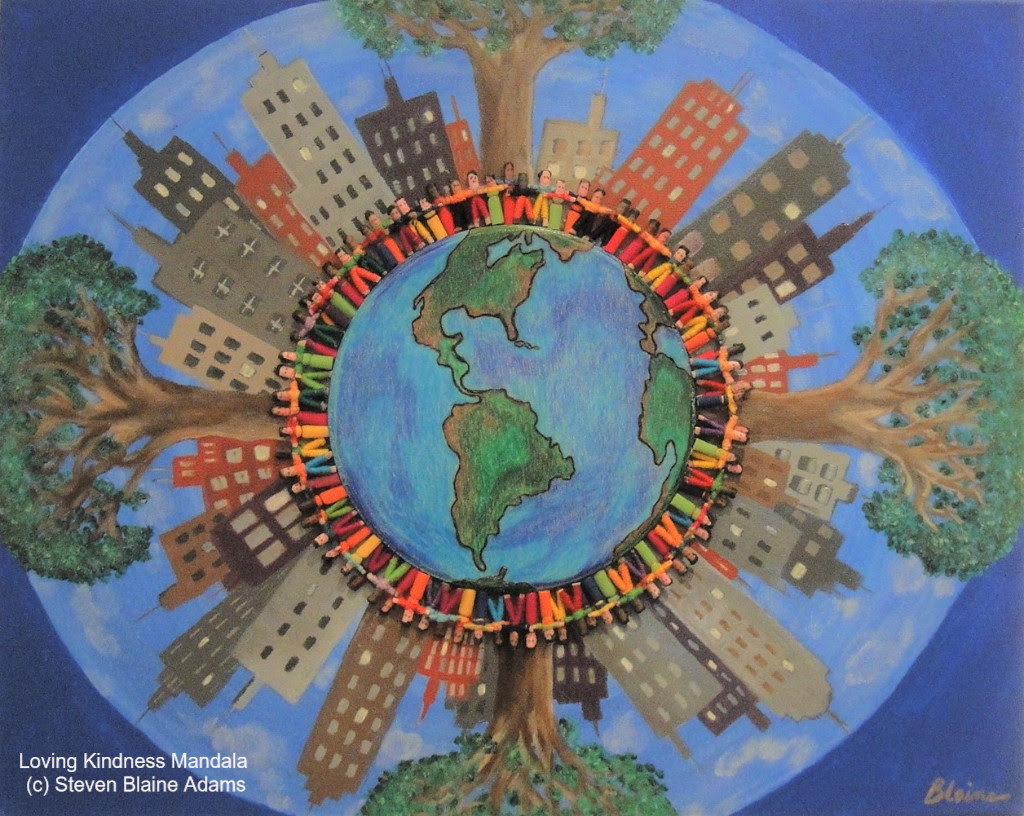 “Explore how the arts bond a community and become its language.” This is the invitation sent out to us by Life Force Art Center’s exhibit, Art: The Language of Community running from September 10, 2017 – January 10, 2018. We are called to explore, to venture beyond the beaten path of what it means to experience art. Art is not a binding, but a bond, not a forced connection through some Jungian supra-consciousness, but a joining of hands. Art is the communication of community. We see this when people throng around the Bean in Millennium Park. What is more quintessentially Chicago? But the works in Art: The Language of Community do not represent so much a geographical community, trapped within the confines of zipcodes, the boundaries of lake and land, the finitude of L lines. Instead, they ask us to explore and expand our definitions of community. (Click here for an album of all the artwork in the exhibit).

Much of new age spirituality teaches us to look for the microcosm in the macrocosm and vice versa. Steven Blaine Adam’s piece, “Loving Kindness Mandala,” asks us to see how the unity we feel within our neighborhoods is reflected by our oneness on the planet. A city street lined with green trees contains within it the world, endlessly spinning. As the worry dolls take each other’s hands, creating a support network to lift all up no matter their struggles, the boundary between local and global is blurred. In an increasingly globalized society, who knows where the ripple effects of love and kindness can take you? But what about beyond our planet? Lorraine Moretti’s “The Unformed Promises of Space” opens our awareness to another level of connectivity. As we contain the world, Akasha, the Unknowable Goddess, contains all of the worlds. Through community, through art, we can see how we reflect even the highest powers and how they reflect us.

The splatters and swirls of white and red, giving hints of stars and nebulae, carry us over to one of the tying symbols of community depicted throughout the exhibit- fire. Fire is inspiration; it is creation; it is life-giving and life-saving. Shown in art, fire speaks a language of more than just flames and tongues and reds and oranges. Fire is our connection to “Hestia, Goddess of Community”, who connects every home and dwelling place in the world into one community within Her heart. We see Hestia again in Mary Burton’s second piece, this time within the artist and teacher Colleen Koziara, conjuring brilliance out of the “Cauldron of the Painting Class.” The fire becomes the center around which community can build. (Colleen Koziara’s “Where Community Begins” seems to almost reference this piece. There is a Hestia-like figure again, stirring a cauldron over an open flame. She stands on a hill. To where? Olympus? Fall leaves set the trees ablaze in tones of ruby and citrine.)

Fire in another form greets us as we come to “The Forest Electric” by Kurt Fondriest. Electricity allows us to connect around new, virtual hearths in the digital age. But just as a larger social network is gained through the use of our new rituals, Fondriest speaks of loss within the community. Within us all is a spark, but we no longer plug into it as easily as in older times. Fire is not just creative, but destructive. What communities have we lost in our unceasing need to plunge ever forward into the new day? Even destructive fire has its positive aspects. “RESIST PERSIST INSIST” shouts the tea lights pictured on Lynn Carol Henderson’s triptych. When the community speaks, those who claim to hold power over it do not always listen. Fire is a reminder of those whose candles have blown out too soon. “RESIST PERSIST INSIST” also shows how the body collective can be used to communicate messages of resistance in an age of patriarchal oppression.

Fire and earth meet in “2 of Wands” and “Queen of Disks” by Laurel Izard. Hestia, Goddess of Community, reappears on the former, fire sprouting between her open legs. We can be inspired by loss within the community. Snakes, emissaries from the Underworld, show us fire’s power of transformation. The Earth Mother in the latter piece stands between two torches, showing us that a community cannot connect if the members are not grounded. Without substance and action, ideas hold no power.

Finally, the exhibit encourages us to explore who we allow into our community. Will we accept Sujata Tibrewala’s “Devotee” no matter what religion she professes, if any? She is celebrating Holi and we are invited to play with her among the many flashing colors. Will we also join “Playtime” with the sparrows of Lisa Nomikos’ painting? Animals, as “Siblings” by Sujata Tibrewala reminds, are living breathings. They share the planet with us. If we are taking the hands of our fellow human siblings, then we must include our siblings of other shapes and sizes. Just as our babies learn slowly to crawl, Nomikos cardinal-ifies that feeling of joy when we watch our loved ones learn something new in “Gathering.”

We are beholden to the members of our community we often forget when we act in a human-centric manner. Our community is not just Divines and Homo sapiens sapiens. Sometimes, we are quicker to include stars and other planets before we do trees (“The Stone Circle” by Jessica Kronika relies on human constructs to connect us with nature energy, building a bridge between the human need to dominate the environment and our reliance on the environment) and horses (“Running Free” by Mary Lahart reminds us that our furry friends build support networks just like we do) and flowers and birds. Is the owl hooting in the tree at night not just another elder spouting wisdom as Lahart shows in “Shapeshifter”? In the frenzy of making music, do we not connect with the same primal energies we accuse beasts of living in their entire lives as we recognize in Kat Kidwell’s “Animal Jam”?  “The Autumn Green Man” watches our interactions with nature. For too long we have tried separating ourselves through civilization and technologies. We must try to reconnect and end the destruction of our environment and the constant annihilation of other species.

The overarching message of Art: The Language of Community is connection through love. I asked earlier about what kind of community for which the exhibit is calling. We often think that “real” communities are exclusive rather than inclusive. Unity among a group of people is often based on their degrees of sameness. But perhaps we are “The Clan” of Dorothy Garden- different sizes, shapes, and colors. Different creeds and beliefs. Our banner is one of love, symbolized by Judy Demchuk’s “Lung Ta Runs with the Wind.” And it is carried by the many angels as they herald the Age of Aquarius such as Christopher Bednash’s “Heralds of Aquarius”, “Angel Dorothy”, and “Angel Wangari.”

You see, this exhibit is not merely a collection focused around a central scene. Like the spokes of a wheel, it is easy to just assume the artists took varying paths towards one common goal. However, Art: The Language of Community needs to be taken as a narrative. Language was invented to say something. All of these pieces, whether they speak of playtime or loss, have a story. Together, they take us on a journey towards oneness while respecting our differences. Of acceptance for all and redemption for our attempts to exclude and destroy. Of course, this could just be my path through the many works! We are invited to explore, not to stay safe on the well-trod path. There are infinite narratives hiding in the strokes of pain, the bonds of glue, and the twining of threads. Seek them wherever they lie for you. Explore.

Aura Chapa is a poet, writer and priesten living in Chicago. Read some of Aura’s poetry here.