Building Community through the Connection of Spirituality & Art 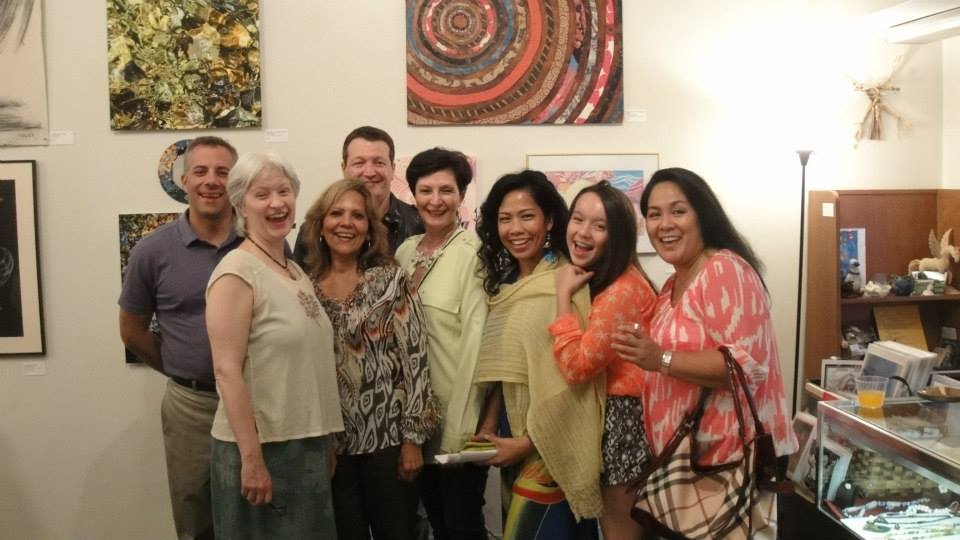 Being new to the city, I discovered the place after picking up an exhibition card for their “Ancestors” show.  I was drawn to the image of Marilyn Zimmerwoman’s piece, Sarcophagus for My Mother, on the card, showing the body of a dead woman–gaunt, yet retaining a definite dignity, prepared for the afterlife like an ancient Egyptian queen.  While the body had been left behind, like a snake shedding its skin, the image clearly shows the burning fires of pure spirit living on.  This work reminded me of my own mother, who not all that long ago returned to the land of the ancestors herself.

So I went to the show.  The gallery is not large, but open and inviting, with room enough to host small to medium size gatherings.   There I saw maybe two dozen inspiring paintings, sculptures, photography, and other works of art.  Some pieces were abstract, others very representational, and others a combination of both, but all them had been chosen because they evoked the presence of our ancestors, whose influence upon our reality continues to live on.    I spoke for a little while with the woman attending to the gallery, the founder and director of the gallery, Joan Forest Mage.  She was eager to tell me about the myriad of events happening (about 20 programs a month) in the Center, with several directly tied to the themes of whatever the current exhibition.

Joan explained that the gallery usually holds four major exhibitions a year, curated from submissions from artists from across Chicago, the United States, and beyond.  Recent shows have centered on themes such as spirit guides, animal wisdom, the green world, and spiritual healing—of people and nature.  The current show is, “From Energy to Iconography,” which offers a myriad of invocations of “Spirit,” from the abstract pure energy to the specific symbols of world religious traditions.

As an artist myself whose work, although generally more focused upon social activism, has always been spiritually driven, I was intrigued by Life Force Arts Center’s mission of exploring the connection of art and spirit.  Certainly, this connection has been present throughout the tens of thousands of years that humans have made art.  We seem to have an innate need to find meaning within the chaos of life, to perceive the loving intelligence at work “behind the scenes” of our shared reality, and to evolve toward greater understanding of and compassion for ourselves, one another, other living beings, and the wider world.  Each branch of the diverse family tree of the arts is concerned with rendering the invisible (the feelings within our bodies, our emotions, our ideas, our aspirations, our spirits) visible and with making the intangible tangible.

Even today, these impulses underlie the work of very many modern artists, even if they would not consider their art to be “spiritual.”  Yet, I have seen few galleries with such an explicit focus upon the nexus between spirit and art, as with Life Force Arts Center.  I was also intrigued how the organization has become one model for building community in the Chicago area.  So I asked Joan Forest Mage if could interview her about how the center originated and sustains itself.

When we talked, Joan explained to how the organization that exists today has arisen from her whole lifetime’s journey, a winding path of creative expression, intellectual investigations, deep soul searching, and some “nudges” from the ones at work from in the realms of pure spirit.  As a dancer in the 1980’s, she found that her performance work puzzled most of her audience, with a smaller portion of folks either being amazed and inspired by it, or viscerally rejecting it.  She mentioned one encounter with one person, scarred by abuse, who responded with anger at Joan’s provocative dance.  However, Joan was fortunate enough to get to talk more with this woman, who, in the course of their conversation, admitted that her negative reaction to Joan’s performance stemmed from the feeling that Joan was exhibiting a freedom that the woman did not have, being still caged by the traumas of her past.

Experiences such as these caused Joan to reflect upon the nature of her art practice, realizing that the catharsis she could unlock in others was too powerful, even dangerous, to do in the uncontrolled environments of public performance spaces.  At the same time, she found that art therapy or dance therapy was still too grounded in Western psychological practices to be the right path for her.  Over the next many years, Joan would ask herself (and her spiritual guides) “what is the work that I must do?”  While she did pursue academic work, including receiving a Masters degree from School for New Learning, DePaul University, in a self-defined program of “healing ritual through the arts,” the message she feels she repeatedly received for her pleas for guidance was to look deeply within.  She came to realize that she was a shaman, who would train to be able to perform spiritual healings known as “soul retrieval,” helping hundreds of people to reintegrate those parts of their own souls that had been broken away by trauma.

Even with this fulfilling role as shaman, Joan still sought how to best use her unique combination of skills, balancing her time for many years in the late 1990’s and the 2000’s between dance, teaching, and healing.  Through the connections she was making with a variety of others, by 2008, she saw that a community of individuals was beginning to coalesce to amass the financial and other resources to open a public space for performances, visual art, workshops, healing, and more.  This first incarnation of Life Force Art Center was much larger than the current space, which allowed them to rent the facility out to a wide variety of other community organizations for other events.  This was an important source of revenue, but also diluted the mission of the space, forcing them to realize that the space was becoming too many different things to too many different people.

Throughout this whole process, everyone involved was volunteering his or her time.  Like any organization, there have been ebbs and flows, with people coming and going, as well as some personality clashes, misunderstandings, and conflicting visions for what the center should do.  Despite not having to pay a staff, and generating income from rentals, course fees, and donations, the larger first space proved too expensive to maintain.  They needed to move and were struggling for a way forward, but the community that had formed was adamant that Life Force Arts Center would continue on.  Joan approached the Lakeview Chamber of Commerce for advice on how to proceed.  As it turned out, the Chamber was moving out of its space at the time, which opened the door for the Life Force Arts Center to move in.

This current space is smaller, but much less expensive, making it much more manageable financially.  It can still be a struggle for them, as they cannot count upon the rental income they had before, but within the limitations of the place, there have been opportunities as well.  They have been able to focus more on the core of their mission, providing a place for literary, visual, and performance art to both be shown and created.  They still have classes such as beginning and advanced shamanism, meditation, astrology, tarot, faeries, the runes, energy healing, crystals, and more.  Increasingly, they are incorporating art-making into these metaphysical topics, with courses such as drawing as a meditation tool, dance inspired by visual art, and drum circles.

Moving forward, Joan envisions greater integration of the courses offered at the center, so it is not as much a “smorgasbord” of topics, and more of a coherent program of training, both for artists who wish to deepen their practice with spirituality, and metaphysical seekers who wish to use to the arts as a vehicle to explore the mysteries of spirit.  They also have recently launched Pantheon, an online journal of the art-spirit connection.  This is not as much a newsletter of the happenings in the center, but a site for intellectual consideration of the manifold aspects of the search for healing, wholeness, and beauty embodied by spiritual creators.  Pantheon is also intended to be an extension of the community formed around the activities of the center, so thinkers both within and beyond Chicago can connect and exchange ideas.

So, in using the arts to embody the life force that pervades all things, we see that hundreds of lives have changed, networks of relationships have formed, and the universal urge toward beauty and joy has been nurtured.

Christopher Bednash is an interdisciplinary artist who uses the arts to nurture the notion that more compassionate futures are possible.  He believes that the changes that humanity are going through to become a more peaceful and ecologically balanced species are of mythic proportion.  He is interested in community based art and spirituality and is an active member of Life Force Art Center.  Christopher is currently pursuing an MFA degree in Interdisciplinary Arts and Media at Columbia College Chicago. For more information, visit his website: http://christopherjosephbednash.net/