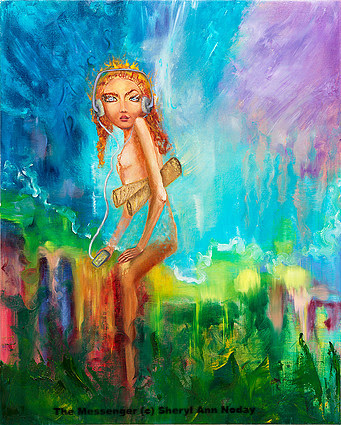 Joan: Do you want to say something about how we decided to create Rainbow Messengers? I remember I said, “Gee, could you do one of the performances for Life Force Arts Ensemble (LFAE) for the Fall Equinox?”  To give some background: LFAE has been producing one of these performances on each Wheel of the Year Festival for over a year now. The Wheel of the Year Festivals are seasonal commemorations, that help us stay in touch with nature and, in a larger sense, the seasons of our own lives. We work with eight Wheel of the Year Festivals: four are on the solstices and equinoxes, and four are on what are called the cross-quarters, which would be exactly half way through the seasons of spring, summer, fall and winter. That means we are producing an original evening length live performance with vocal and instrumental music, dance, and a text which can be a story, poem or other literary form, and we also incorporate the visual art in our current art exhibit into the performance.

Aura: First you asked me to write the text for performance for Samhain, because the original plan was to do Lady of the Oceans for Fall

Joan: Which is Sharon Bechtold’s new piece, that LFAE be premiering on November 7, 2018 at LFAC.

Aura: Yeah, the next piece that Sharon’s working on. I mean, it’s been in the works for a while. And then it was like actually Lady of the Oceans works really well with Samhain. So I switched to do Mabon or Fall Equinox. So I said, “Sure!” At first, I just wanted to do something on Hermiris because Chris Bednash has brought into my consciousness the concept of Hermiris.

Joan: Hermiris is the imaginary god of the imagination that Chris works with in his performances as an alter ego

Aura: And there’s Chris’ artwork The Dice of Hermiris that is in the current exhibit at LFAC, Love & Wisdom: The Skills of Maturity. So I was like, let’s do the Fall LFAE performance on Hermiris. And now that has grown into all the different forms that the main text has taken.

Joan: The rainbow is only one aspect of Hermiris.

Aura: Yes, it is. In fact, I think this performance touches on all of the rainbow spirits.

Joan: We wanted to pile them all in this one performance like people packed into a Volkswagen!

Joan: Do you want to tell people a little bit about Hermiris?

Aura: Yeah, Chris describes Him as the Imaginary God of the Imagination, child of the Greek deities Hermes and Iris. So the names are literally put together to form Hermiris. We now consider Him the Modern God of the Imagination because we feel like he’s–at least I feel like He’s a real entity. And He first appeared in the painting Chris did for the exhibit Passion and Vision: The Skills of Youth. And then The Dice of Hermiris appears in the current exhibit.

Joan: Right, there’s a couple different characters or alter egos that the artist, Chris Bednash, has. He is an interdisciplinary artist.

Joan: And a great guy. And a good painter. Not only does he do fine art painting, he volunteered and helped us paint these walls at LFAC!

Aura: He always comes to LFAC’S Dead Poets Halloween Party as Hermiris. He did some of his Earth Weddings at LFAC, too.

Joan: As the Rainbow Chaplain.

Aura: Which is one of his—

Aura: Yeah, he’s done lectures on the Age of Aquarius. And, so I really wanted to do The Dice of Hermiris from the passion, from what I’ve learned from Chris which then naturally led to involving Chris as a performer in Rainbow Messengers. But I didn’t want it to just be Hermiris. I actually did a reading with the dice to determine what it should be about. And I got a message about fun. Because the LFAE performance in August, Desert Medicine had been very intense. Lady of the Oceans is going to be way—

Joan: Off the charts intense.

Aura: So why don’t we do something that’s lighter? So I was like, rainbows are light.

Aura: So I was like okay. Let’s go with that. But as this has developed, I’ve learned that rainbows have edges. So that was how this all started, just seeing where the inspiration came from.

Joan: Delving into the artwork, into Hermiris, into what rainbows mean.

Joan: I’d like to explain that The Invocation is honoring and calling in whichever spirit is guiding the Healing Performance. For example, in December 2017, Aura created a lovely Invocation to Guadalupe-Tonantzin, who was the guiding spirit for the Healing Performance we did for Midwinter that year. For Midsummer 2018, Lorraine Moretti created an Invocation called the Litany of the Lovers, including the main guiding spirits, Psyche and Eros.

Aura: Joan sent me a bunch of rainbow mythological characters. And then I put those into a poem. So that was, the invocation was—

Joan: These are the ways that I move the creation of these performances along as LFAE’s director.

Aura: I mean, it really was, yeah, Joan’s research. And then I was like all right this is great. We’ll put this in there. And that was the invocation. And then I started working on the main text. And that was a lecture basically on Gilbert Baker, the creator of the rainbow flag. And then it was like that is way too lecture-like. So then I thought oh, I’ll do a poem.

Joan: But it was some wonderful research. And the way you wrote it was wonderful.

Aura: Thank you. Then the poem didn’t really work as well. So then I sat in the Merchandise Mart and I guess I was doing shamanic journeyed as I was typing out. And I got a very powerful but angry message from the rainbow. It was kind of a call to arms. The poem I wrote had a lot of anger in it about what Chris Bednash calls the “ecocidal corporate kleptocracy.” But then the great aspect of creating a LFAE performance is that it’s all collaborative, as you mentioned with Desert Medicine.

Aura: So then I sat together with Joan and Natalja Aicardi and wrote the current concept which is a lot more celebratory as well as it is saying “Let’s look at the reality of what’s happening in the world”.

Joan: Right, and it’s about looking at what are you trying to convey in a particular performance? In preparing the performances, I always think to myself, “Okay. Who is going to be there that night, October 13, 2018, and what do they need to hear in order to finding healing and transformation?”

Joan: I leave it up to the spirits to inspire what to write, how to get that exact right energy of, what we’re trying to say, how we’re saying it. For example, one of the ways to do that for this performance was looking up the different Gods and Goddesses of the Rainbow. And you found that wonderful text about the Hopi prophecy of Whirling Rainbow Woman. Somehow that just really clicked and it made all of the other parts of the performance work.

Aura: Yeah, at first it was just barely mentioning Whirling Rainbow Woman and the Whirling Rainbow Prophecy. And then the more we dug into it, the more it was like okay, this needs to be a big part of the performance.

Speak to me of the prophecy

In the voice of Whirling Rainbow Woman

Speak to me of the day the buffalo return

And the Fifth World of Peace rises up

On shaky legs it rises up

Sending to us dreams of color

Aura: All of the LFAE performances have been collaborative.

Aura: I think that’s been the most important part. We all bring different skills together. I think that’s what makes these really click because you are the director. And I think you give us, the rest of the cast or the Ensemble, the flexibility to bring our own talents into it.

Aura: So that’s what makes these works as far as a performing unit goes.

Joan: Right. And in terms of the 4 Skills of the Life Force Arts Method (Streaming, Osmosis, Dialogue, and Crystallizing) which is the theoretical basis of everything we do – I realized many years ago that if you look at that the 4 Skills in terms of the performing arts, Streaming is like improvisation in terms of generating ideas, creating something and seeing what comes out. And then Osmosis is more like technique: learning a certain artistic or performance technique, imitating somebody else to understand how they do a certain skill that you want to do. Dialogue is like rehearsal. It’s where you’re getting together with your other performers and, seeing what works and what doesn’t work, and getting to the core meaning of what you are seeking to convey. Crystallizing would be the performance. It’s when you’ve put the material into a form all the performers understand to present to your audience, such as we do with the structure of the Healing Performance. And, of the 4 Skills, we rely a lot on the third Skill of Dialogue to produce these kinds of performances.

Aura Chapa is a poet, writer and priesten living in Chicago. She is a member of Life Force Arts Ensemble. Read some of Aura’s poetry here.

Joan Forest Mage is proud to serve as a shamanic artist, teacher and healer in her hometown of Chicago. She is the founder and Artistic Director of Life Force Arts Center, dedicated to activating the spiritual power of the visual, literary and performing arts in artists and audiences. First awakened to an understanding of the human energy field through her life-long profession of music and dance, Joan studied energy work, shamanism and healing ritual with numerous teachers, and has been doing shamanic healing since 1995, performing more than 900 Soul Retrieval healing sessions. Joan earned a Master of Arts Degree from School for New Learning, De Paul University, Chicago, with the focus area “Creating Healing Ritual Through the Arts.” She is one of the contributing authors of Healing with Art and Soul: Engaging Ones Self Through Art Modalities, a book on Expressive Arts Therapy. Joan is the creator of Life Force Arts Shamanic Training, a comprehensive program of shamanic study from beginning practice to training to be a shamanic healer and ritual leader/teacher. Joan also is the founder and director of the shamanic performance group Life Force Arts Ensemble, which includes dancers, singers, musicians, actors, storytellers, writers and visual artists who use the arts to create powerful spiritual healing for the true self and creative community based in the Life Force Arts Method.