Embracing the Vastness: The Art of Iris Pasic 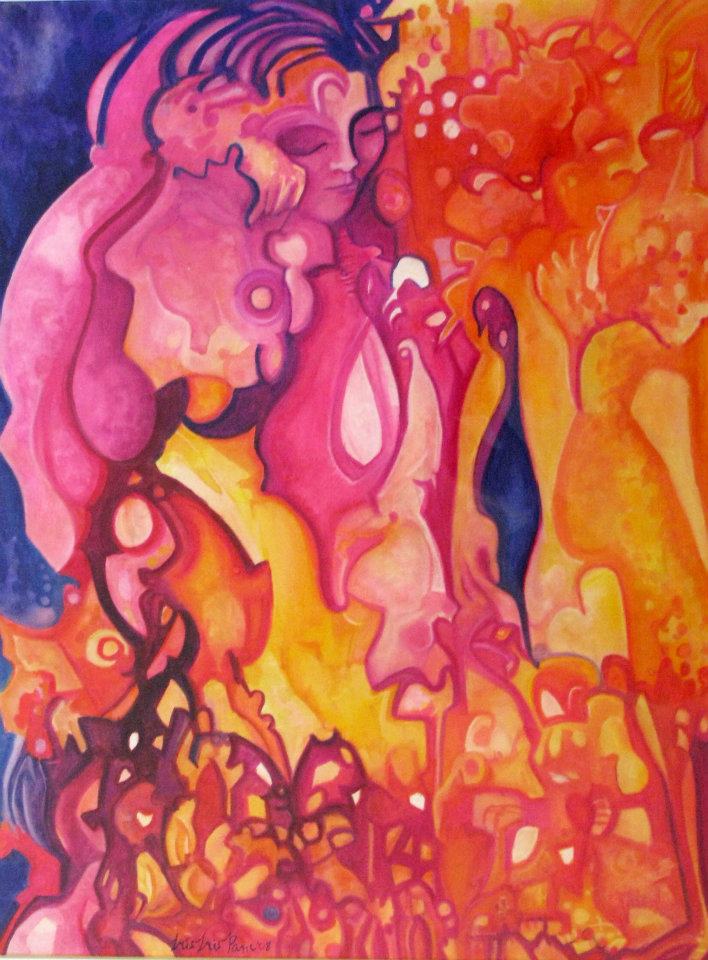 Life Force Art Center’s latest art exhibit, “Media and Mediums: Artists Who Channel,” takes the viewer into a fascinating exploration of the myriad ways through which spirit and art intersect. Among the talented, contemporary artists spotlighted in the show is Iris Pasic – a native of Sarajevo, who began to draw as soon as she was able to functionally grip a pencil at the ripe young age of 18 months old.

There is rich body of knowledge in Iris’ work: tales of ancient Babylon, as well as pieces on Norse and Hindu mythology, are notable influences on this erudite artist. Per Iris, she enjoys deciphering the interplay between ancient text, art, and stories – believing they forge visual symbols that become a channel through which we may learn about spirituality. Unsurprisingly, symbols feature prominently in her works: they directly relate to her process of personal growth and spiritual self-discovery.

An avid student of pictographs and hieroglyphs, Iris explores how language has been historically used as pictures through her artwork: by introducing an odd consortium of freestyle text amidst her images, Iris creates a sense of chaos in order to communicate the universal value of messages and symbols. According to her, humans mistakenly try to translate ancient symbols into contemporary language when, in fact, they are far more open-ended. While love is a driving emotion that fuels much of her work, with many of her pieces embodying a lot of her own personal thoughts or experiences, her primary goal is to share the lessons that she’s learned.

For the exhibit, Iris presents a series of black and white drawings and watercolor paintings that depict her fascination with ancient symbols and languages. For example, “In the Scribe’s Ability” is a wing-themed drawing made with black and white felt pen on paper that features a conversation between two beings – one being in human form kneeling before a second being from another realm. The title is a creative play on words (say the title quickly, and it sounds like “indescribability”) that alludes to the cornucopia of indescribable signs and text strewn throughout the piece.

When sketching her black and white drawings, Iris invites the creative life energy to freely flow through her artwork, without interference, while in a meditative state. By contrast, her three colored pieces entail a more involved process whereby she tries to discern the significance of the shapes and symbols that she receives, and determine how they feel to her.

These latter pieces include a predominantly blue and pastel watercolor crayon on paper called “Twirling Twilight,” which portrays two, other-worldly beings dancing in a circle, receiving information from a higher source and other inferred beings. In the angelic-like “About a Dream,” Iris employs a rich and vibrant palette of fuchsias, indigo, and reddish-orange watercolor crayons and markers on canvas to illustrate a being alongside a dreamed being. Finally, in “Twinned,” she presents an innovative drawing using earth-toned watercolor pencils on paper – also using both hands at the same time to create it.

When receiving images or inspiration, Iris admits it’s sometimes challenging to discern the difference between her own work – i.e., the random influences she picks up – versus the divinely inspired, pertinent knowledge that she receives from a higher power. Per Iris, “it’s a continuous, learning process.”

Interestingly enough, Iris was raised atheist, and the concept of God or Source didn’t even begin to take shape until her father converted to Hare Krishna, and religion was thrust upon her at the age of 13. Still, even at a young age, she vividly recalls intuitively knowing certain things like having past lives, experiencing paranormal encounters with ghosts, or picking up her father’s book on Nostradamus and feeling utterly fascinated by the symbols in the book.

According to her, she knows when something feels so vast that even scriptures can’t possibly capture it in words. Consequently, she’s always tried to develop her own ideas regarding spirituality, as evidenced by her work: by acting as a conduit for some greater energy than her own, Iris is able to create spiritual art without filters, thus allowing her divine self-expression to emerge.~Shantal

About the Artist
Iris Pasic describes a childhood filled with innumerable wonders, adventures, places, and volumes of strange fairytales. After moving to the U.S. with her family in the early 1990s, the American way was a shock at first. While her regular education certainly provided novel experiences, it was art school that provided a truly conducive and productive forum, which opened Iris up to worlds of possibilities and new ways of thinking and making art.

Iris attended the School of the Art Institute of Chicago and received her BFA in 2002. While at SAIC, she studied printmaking, photography, and video, among other media and subjects. Iris also became very interested in and involved with various social and political justice issues, which greatly influenced the content of her art at that time. Still, some things cannot be learned in school, so Iris hit the road via a freight train in search of adventure and other creative and passionate folk with whom to change the world, make lots of art along the way, and leave it there.

Her travels took her along many paths and places where her mind expanded in unimaginable ways. Shortly thereafter, the winds of change blew her back home where she’s been inspired to seek her lessons along higher paths. So, here she finds herself constantly compelled to arrange and rearrange pieces of a puzzle that just keeps getting bigger in every possible direction, and to create an abundance of pictures.

Shantal is a creativity and transformational life consultant, event and program manager, Reiki Master practitioner, Raindrop Technique facilitator, and a holistic marketing consultant for individuals and organizations. Her passion is to empower individuals to transform their lives and nourish their creative dream-making process by providing creative and holistic “soul-lutions” for personal growth and healing. To learn more about Shantal, please visit her website: www.evoyoution.com.