“The Gospel of Mary” by Britt Posmer 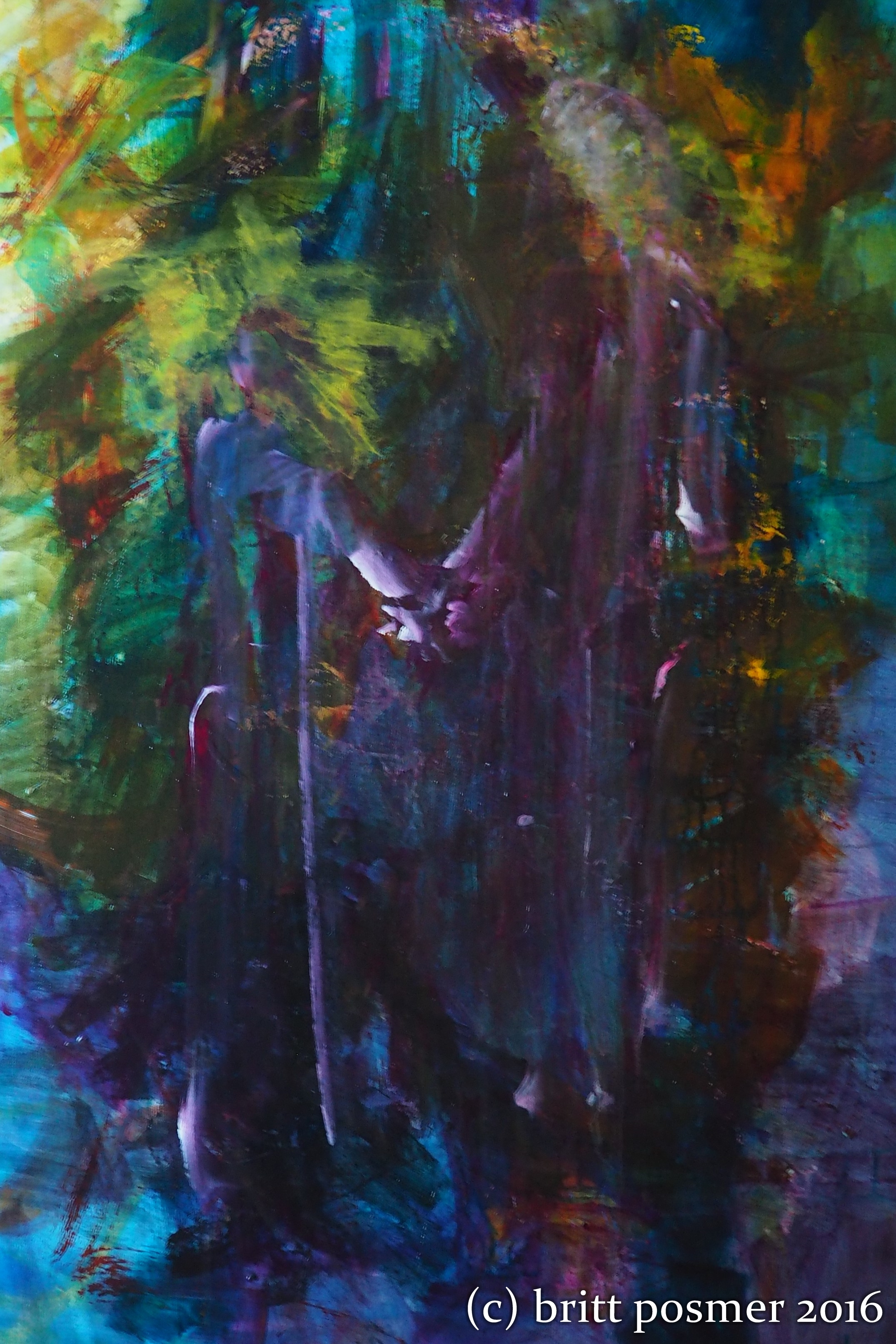 Note: I created “The Gospel of Mary” piece using a process that involved creating 9 images in 7 days on the same canvas; one paints over the previous image when making the next image.  I had created this piece before I heard about LFAC’s The 9 Levels of Self exhibit. This article describes the process and shows the photos I took of each image that was created and then painted over.

Beginning in late summer of 2016, I had the remarkable opportunity to study with and be personally mentored by the painter, FloraAube, founder of The Art of Allowing Academy, as part of the school’s intensive AoA Facilitator Training. The Academy holds as its principle vision the sacred service of midwifing the Soul of the world and aspires to do so through providing, “educational training for women to create empowering circles based in soul directed creativity and consciousness.” In addition to her considerable artistic talent, Flora has a particular gift for opening a wide space of permission for all of her students, encouraging them to risk and inhabit the edges of growth that give rise to the expression of their unique radiance. Saying yes to this immersion was a statement of willingness to discover anew my commitment to the joy and rigor of a creative life, as well as a deep dive into the mystery of Feminine consciousness and what it was seeking to birth within me.

“The Gospel of Mary,” currently on exhibit as part of LFAC’s exhibit The Creative Soul:Art & the 9 Levels of Self, was the culmination of a process that lies at the epicenter of the Allowing method. In preparation for this profound invitation, our cohort spent a significant period of time un-learning and getting loose and relaxed through Process Painting, freeing ourselves from restrictions and beliefs we may have carried around skill, technique, or outcome, and becoming intensely curious about the source of our creativity itself. This approach brought forth a joyful interest in what was potentially different or distinctive about my visual and symbolic language precisely because I hadn’t received or been influenced by formal training to any significant degree. I found that it enabled me to see clearly the edge at which I was currently working, not merely artistically, but from the territory of Soul. Because the context of the training was an active and engaged women’s wisdom circle, all of the emotional and psychological resources were in place for a genuine journey of initiation. 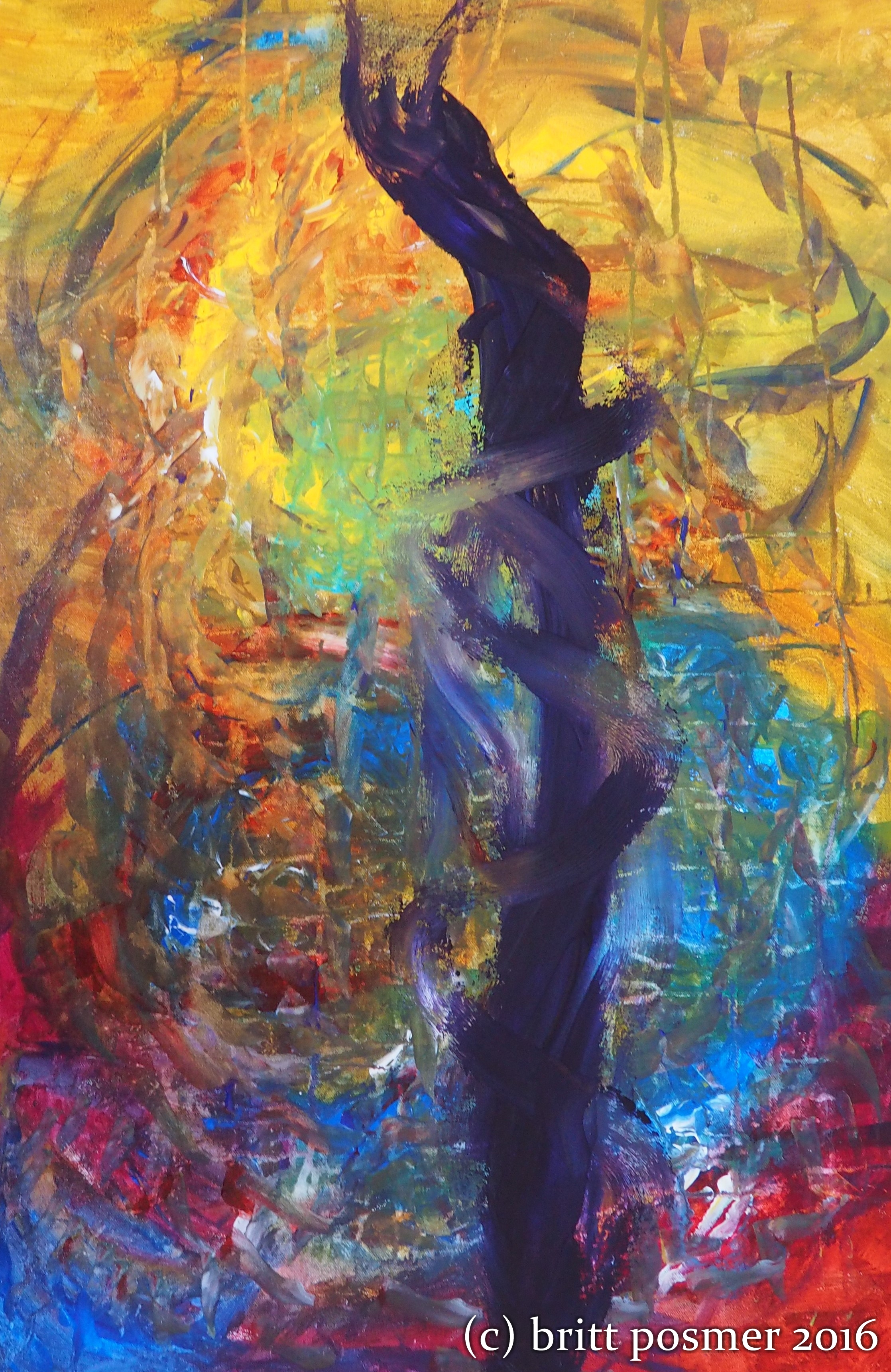 I Am The Vine… (c) Britt Posmer

As our circle began to coalesce and find its footing, the assignments we received drew us into ever more intimate contact with the truth and nature of our own voices and those messages pressing to make themselves conscious. We discovered overarching themes and resonances arriving spontaneously on the canvases of women half a world away. One archetype into which I was pulled powerfully again and again was that of the Sacred Marriage, a familiar and beloved landscape that suddenly took on a new and nearly terrifying sense of purpose and urgency. For perhaps the first time, I realized the necessity of actively honoring and cultivating the Sacred Masculine within myself and his role in serving and protecting the Sacred Feminine through providing her with strong and responsive riverbanks within which her wisdom and energy could safely flow. The issue of containment became both imperative and utterly empowering, helping me to understand a need I had felt for decades but didn’t know how to meet anywhere close to the degree it required for genuine stability. 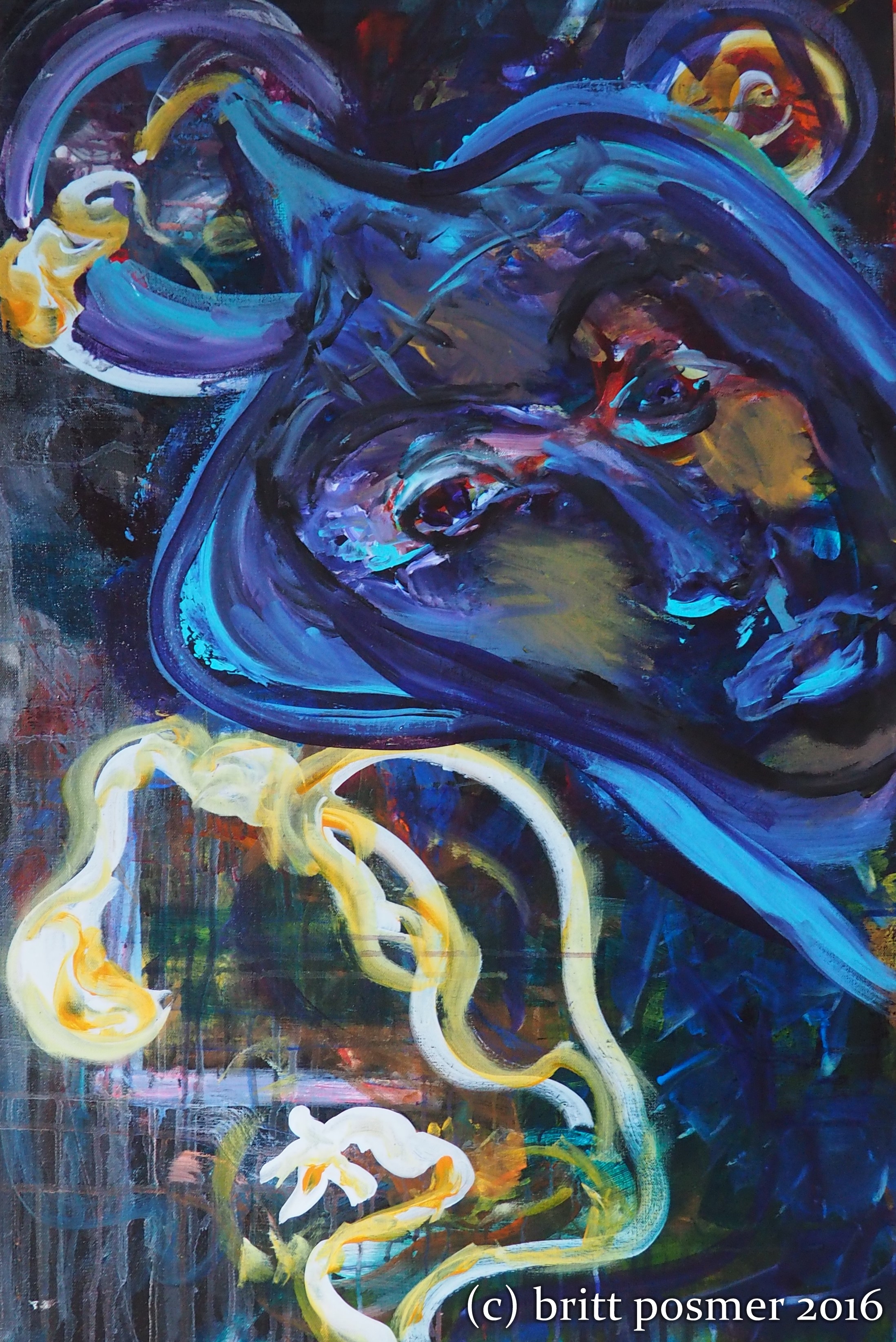 TheAllowing approach relies on facilitating the skills of intuition, receptivity, deep listening, and communing with Spirit. To lead us into the heart of this practice and strip away the layers of habit and convention through which our current perceptions of ourselves and the world were being filtered, we were encouraged to push gently beyond the place in which we would have ordinarily considered a canvas “finished,” permitting it to transform itself over and over into fresh avenues of expression. Through rapt attentiveness to the breaking threshold of our consciousness, the potential for the liberation and integration of unconscious material, as well the clarity of our essential natures, was catalyzed. “The Gospel of Mary” was the last of a series of eight distinct and complete images painted on a single canvas over the period of seven days. 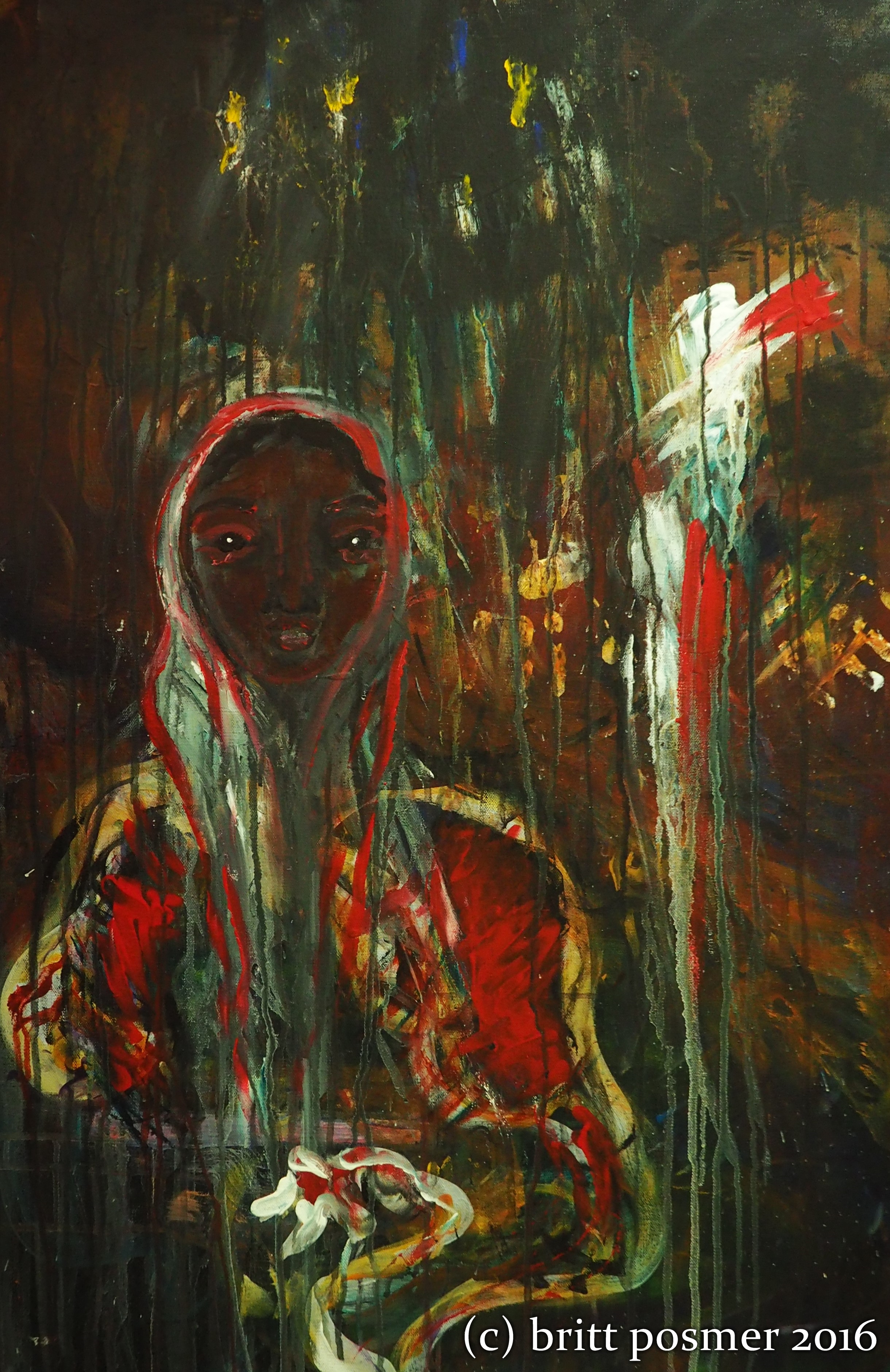 The process began with a rather unusual experience in which I started with the intention of manifesting a symbol of the archetypal bond between mother and child. I set up my workspace as I always do, taking time to reflect on the sacredness of creative endeavor and the immense privilege it is to participate in the bringing forth of the life of the soul, and felt immediately drawn to listen to the beautiful chants of the Taizé Community as I opened the portal to receive.After a brief period of around forty-five minutes, during which time I chanted and sang virtually nonstop, pulling the image onto the canvas through sound and the vibrations streaming through my body and hands, a painting roared to life. It was an intimate depiction of the verse, “I am the vine, you are the branches…” and carried the full import of the Mother and Child archetype, if in a somewhat unconventional way.As soon as the energy stopped, I knew that I was not to touch this canvas further, even though our assignment explicitly called for the willing sacrifice of earlier images in order to access the waiting gifts of hidden depths. This, too, was part of strengthening the ability toAllow, trusting the truth that was present for me in the moment, even as it did not conform to the anticipated unfolding. 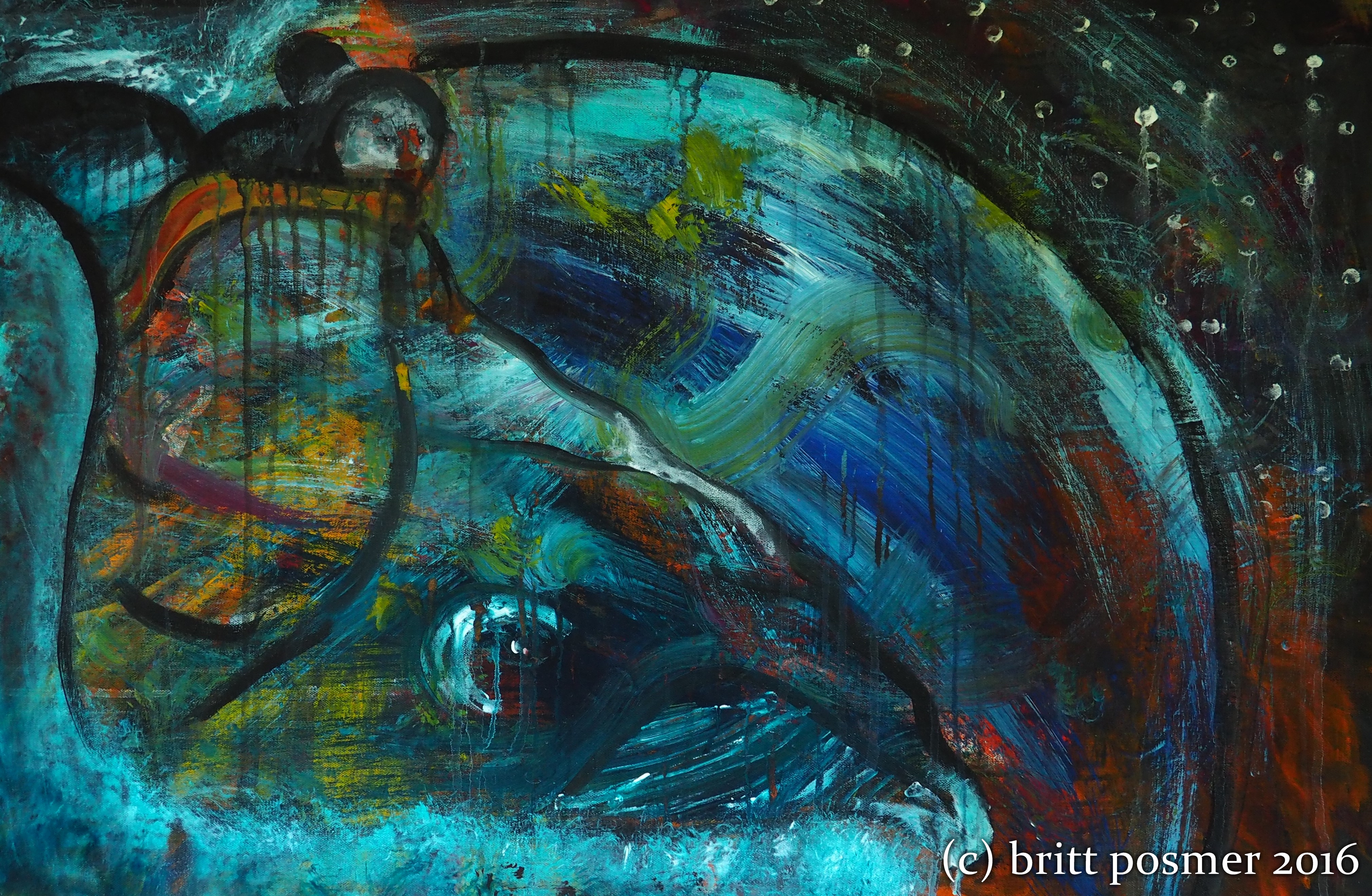 Moving to a second canvas, I heard the inner instruction that I was to treat this surface and the painting I had just finished as a single field of revelation. There was no break, no interruption. Continuing as before, an image of Christ and the Magdalene appeared. It rested for a day and then disappeared under a young girl in a cathedral taking her First Communion. I felt the forgotten awe and terror of the early days of mystical awakening as a child and the inability to comprehend or fully integrate what was happening to me. After spending some time with these sensations and reactions, the girl was replaced by the presence of the Grandmothers, in the form of an Arctic ancestor, half woman, half whale. She brought a fiercely protective, yet still joyous love for the whole of Earth, the wisdom of the waters, and the fearlessness to dive ever deeper into the heart of Mystery. It was difficult to let her go, but the circle of support she brought carried me into the next image, which was a childlike portrayal of a dancer entranced in her movement under a full moon. The moon was dripping like an egg that had just been cracked. Behind the dancer loomed the shadow of a wolf’s head – huge, predatory, and unseen. It evoked a sense of chronic vulnerability and the dangers of the uninitiated girl-child who, lacking self-awareness and adequate mirroring of her value, is easy prey for all manner of predations. The painting that followed was quite abstract, but brought a distinct sense of walking up a series of steps and through the doorway of a timeless temple dedicated to the Feminine. It stayed only a brief few hours before transitioning into the torso of an African woman held within the outline of a boat. I immediately had the association that she was inside a slave ship, eyes closed, but unsure if she was dead, unconscious, or sleeping. She felt like a chrysalis, mid-transformation, as if her confinement was real and yet somehow no obstacle to what she was becoming. 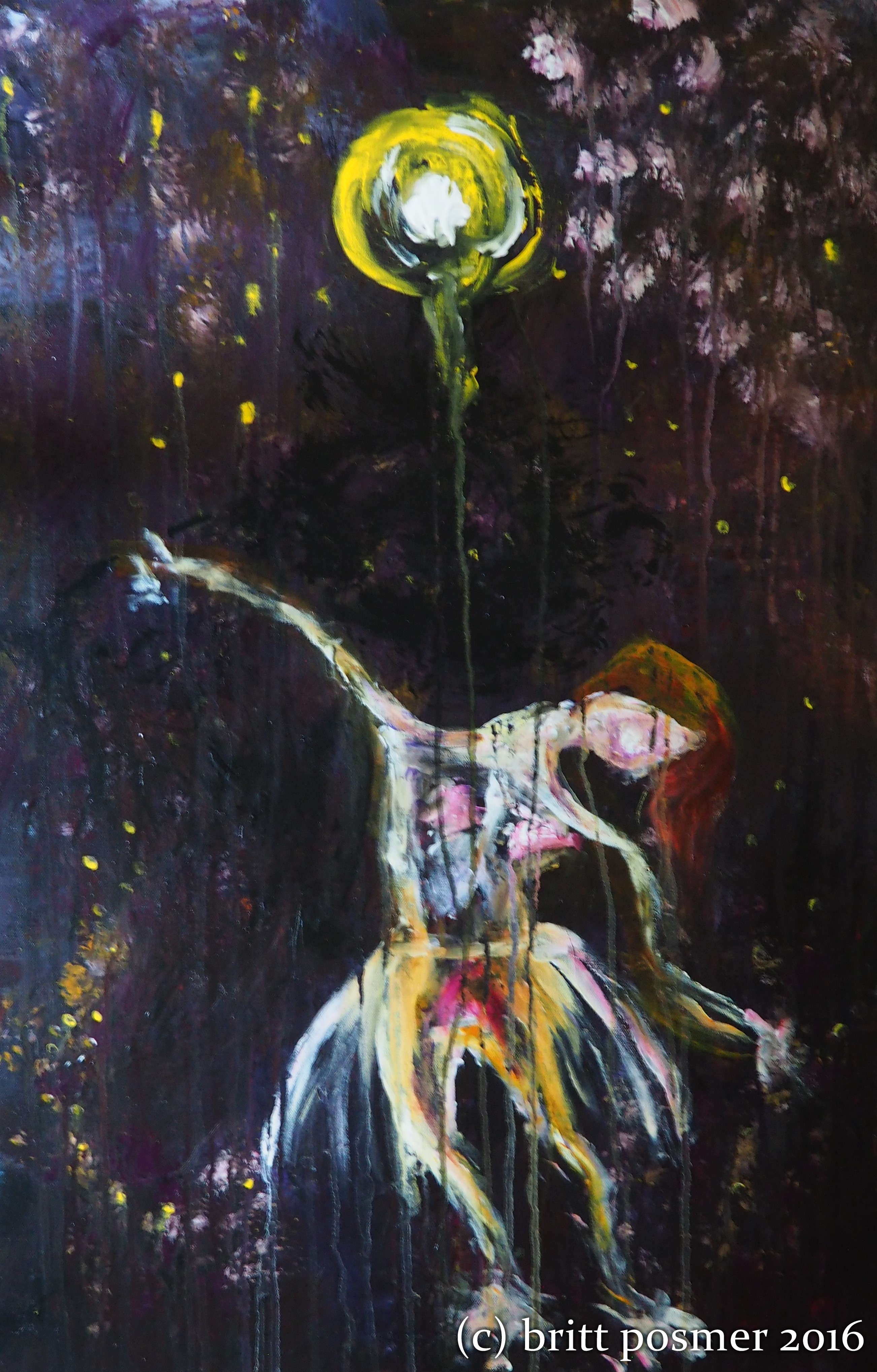 By this point, I was utterly exhausted on every level. I had no idea where I was being led, or if anything worthwhile would come of it. All of my ideas about what I might make were gone; it was impossible to think my way through to the next step. As I faced the discomfort and resistance of further engagement, I was struck by the similarity of theAllowing process to the central agreement in Christian Centering Prayer: to willingly and fully consent to the action and presence of God. Through the repetitive gesture of letting go and the sensitivity of listening ever more closely to the growing emptiness, we are made truly capable of receiving the limitless resources and gifts of our innate nature, the same nature that is inseparably one with the heart of the Divine. 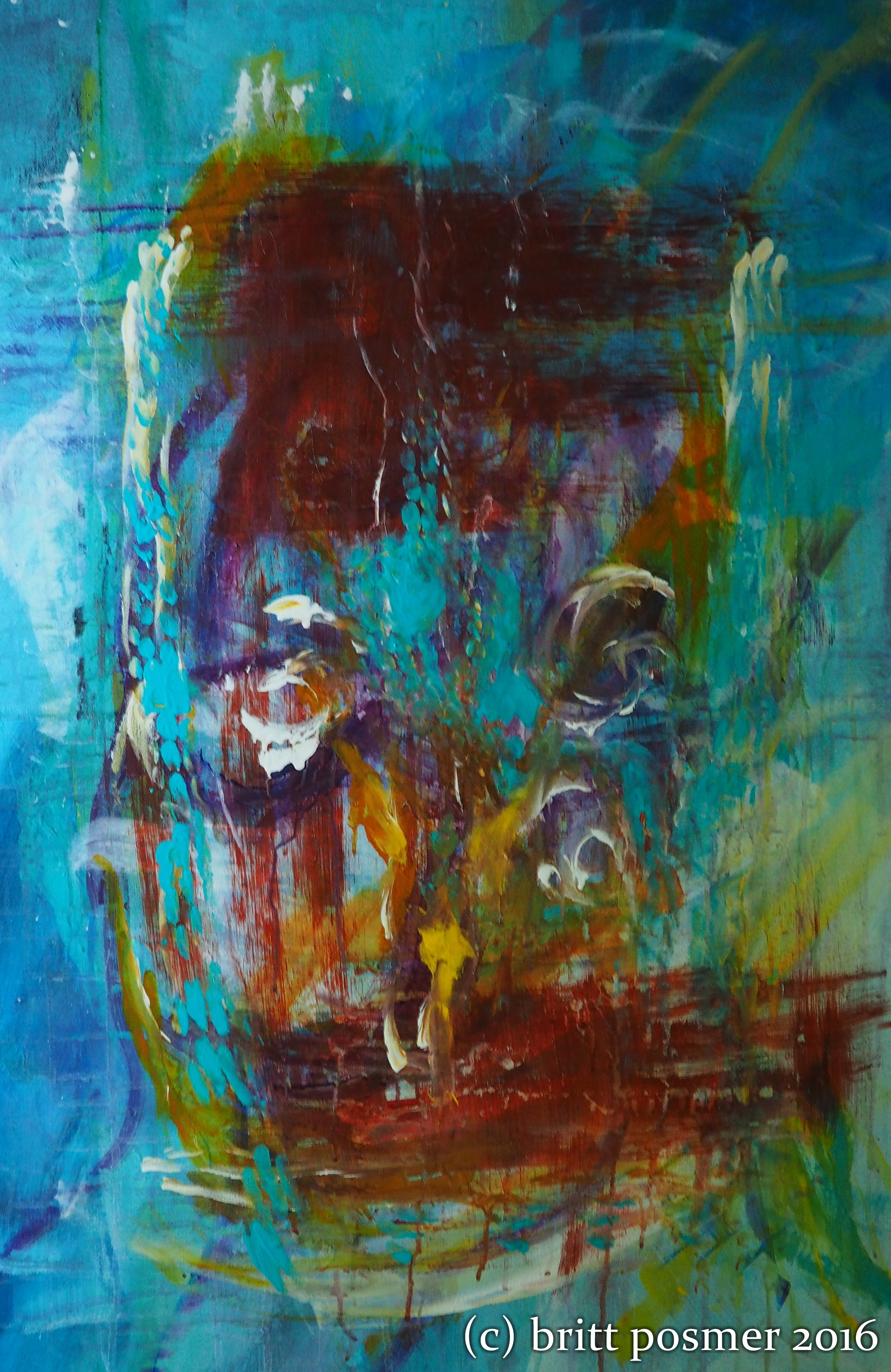 Once more, there was the experience of a rushing wind and in another short burst that was the perfect bookend to match the opening of this exploration, “The Gospel of Mary” was born. A concise description of the final work was included in LFAC’s current exhibit and describes the threads of meaning weaving themselves together throughout the piece: 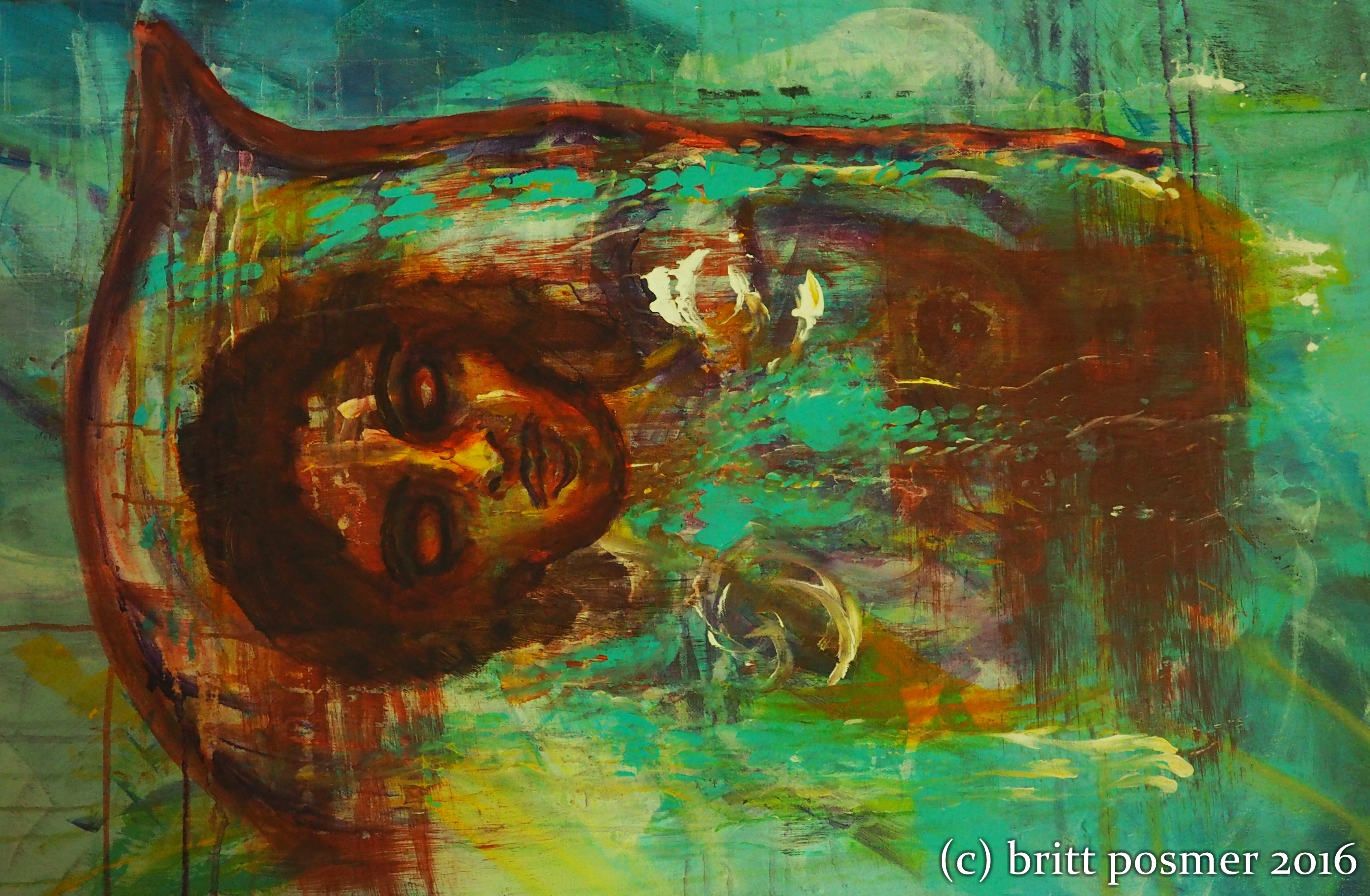 “Utilizing a technique intended to strip the mind of its conscious symbolism, thus activating the deeper resources of the unconscious, as well as the potential for intuition and direct insight, “The Gospel of Mary,” as a process piece, engages all of the 9 Levels of Self in a genuinely holistic act of creation. The completed image, in which the Magdalene and the Christ are seen in their power holding hands, illuminates both the presence of unique spiritual entities, the domain of Level 8, and the inseparability of the awakened Heart-Mind from the totality of the Ground of Being, addressed in Level 9. As the “apostle to the apostles,” Mary Magdalene had her own mission and ministry whose central teaching was made explicit in the living relationship of sacred union she shared with her beloved Jesus. In this piece, she is depicted in the fullness of their equality, their entwined grasp the literal and energetic center of the image, and yet turned, as though in motion, empowered to carry her unique message into the world.”

With the invitation to radical availability, my conversation with the archetype of the Sacred Marriage spiraled into the power and possibility of a new union through the act of feminine consciousness birthing itself in image after image, into its maturity. The skillfulness of theAllowing approach, coupled with the Mind’s own capacity for assimilation, took the raw material of my personal experience and fashioned it into a portal for Soul. Journeying in this way was a profound example of creativity at work as a vehicle for spiritual and holistic awakening and the sourcing of good Medicine to offer in abundance on behalf of our world.

Britt Posmer is a self-taught artist who began spontaneous image-making and writing during a period of critical illness and spiritual awakening. Her work depicts a consciousness and holistic vision that has flowered from a commitment to creative process as both devotional self-emptying and a unique expression of somatic mysticism. Influences that have inspired her recent work include Continuum Movement, the writings of Cynthia Bourgeault, and in particular her insights into the person of Mary Magdalene, Centering Prayer, and the apophatic and kenotic streams as articulated throughout various global spiritual traditions.

Originally trained as a classical ballet dancer, Britt has spent a lifetime in deep engagement with the body. This orientation led her to become a nationally certified massage therapist, Reiki Master/Teacher,  and energy healer, with additional study in Cranial Sacral Therapy, Zero Balancing, Advanced Psychosomatic Character Therapy, Hawaiian and Toltec Shamanism, yoga, and bellydance. She is also exceptionally curious about the constructs of gender and how these shape and influence our notions of body, creativity, spirituality and healing. Britt’s first book of poetry, “The Angel and the Heretic” was released in 2015 and was the basis of a performance ritual presented at LFAC.