The Angel and The Heretic: The Making of an Art Ritual – reflections by Britt Posmer, Mary Burton, Bart Smith & Joan Forest Mage 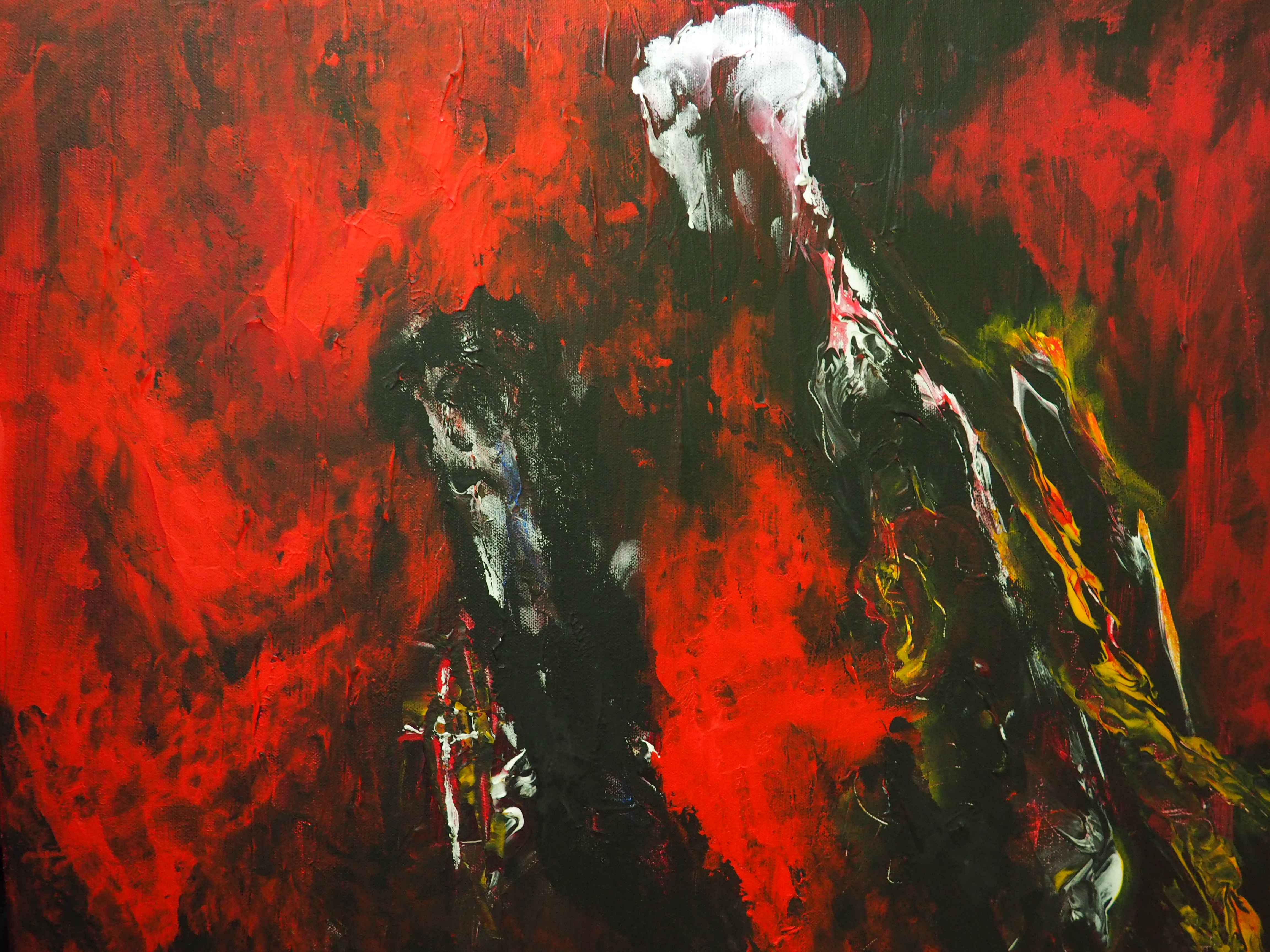 “The Angel and The Heretic” (c) Britt Posmer

On December 5, 2015, Life Force Arts Center presents the premiere of an Art Ritual and Book Launch based on Britt Posmer’s book of poetry The Angel and The Heretic (Saint Julian Press, July 2015). In the following article, Britt and the other performers reflect on their experiences creating the Art Ritual.

Britt Posmer, dancer, artist, writer and the author of the poetry book The Angel and The Heretic, says: Creating a public ritual from the text of The Angel and the Heretic has been a study in the relational inter-abiding of the most intimate and private conversations we have within our own souls and our universal participation in the mystery of a sentient life. The poems in this collection came into the world scrawled in notebooks with colored ink during a time of life-threatening illness. Never had I imagined that through the generosity of countless people who both advocated on behalf of my voice and kept me alive long enough to steward these words, there would be a manuscript to offer up like a brilliant jewel, polished in the heart of suffering.

I have known Joan Forest Mage since 1999, when we embarked on our first of many collaborations and relationships in the fields of healing and the arts. There could be no more fitting place than Life Force Arts Center to launch both the publication of The Angel and the Heretic and a new phase in the realization of LFAC’s mission to create healing ritual through the sharing of gifts and talents across artistic disciplines. It has been curious to see which aspects of the text and performance were easy to hand over into someone else’s care, which felt as though they were for me, and where I fit when the message of the book was released into its larger life. The skill and enthusiasm with which both my words and I have been received is a true joy; I could not have asked for more dedication, openness and loving creative labor than what Joan Forest Mage, Bart Smith, Cat Dughi Fritz, and Mary Burton willingly offered.

As the Angel reminds me, “Resurrection is an eternal happening.” It certainly seems true now, with this unique ritual marking a re-entry into the world, the offering of a mandala of completion in the form of a collection of verse. In an even greater surprise, it also marks my return to dance, the art that has always been my first love, but which went underground in 2009, due to the immense challenges of physical and spiritual collapse. Again, the Angel sings, “…what is for us/ will find us,/ despite our protestations.” Miracles are everywhere and abundant.

Following are a selection of poems from The Angel and the Heretic, some of which can be heard live and with original music during the art ritual on December 5, 2015.

The archangel adored the earth
and fell into a human life solely
that she might have a warm creature-belly
to press upon the ground, and arms,
if not as wide as wings, more ecstatically unfurled
in awareness of their frail brevity, to embrace it.

Sinuously, the fragrance of the grass rose
and stained her cheek as she crooned
to the smallest things,
the pebbles and roots, and the skeletons of leaves
that were once held aloft in a blaze of sap green
burned to the elemental fires of autumn’s longing.

In the loamy soil beneath, a single seed
split its skin in answer,
and felt a sun it had never seen, round as a yolk,
in echo of its fullness.

There is something more than happiness.
I do not know

how to name it, but it makes my cells shine,
and I do not call it light,

but a secret envy I share with the sun,
a brighter star in which we disappear, transparent.

This year
we bought a disposable
Jesus.

He’ll be recycled, of course,
among the discarded
pine boughs and empty
cat food cans

The child is not
so unique.
Plenty of babies are left

outside in the cold. Still,

is the Light that he meant.

(NOT) A LOVE SONG

The sheets part like green water, broken by the arc
of hip and thigh,
rich,
round,
and voluptuous as a cello. Streetlights
have taken the place of the moon, but your skin
is still pale and white as a beginning.

You can cut down every tree, and in each man’s heart
there will remain a forest
where no light reaches the ground. There, wolves prowl
with the scent of winter swirling in their nostrils,
and dragons with scales like coins jealously
guard their hordes
of forgotten jewels,
while women sleep beneath the earth,

or in towers too high
for even the gods to hear them. This body

that is mine (because it is given)
is not a love song. Our language is dead
or has never been. Your body,
that is now mine,
is a shipwreck,
and I,
the sea that claims it.

Joan Forest Mage is a shamanic healer, educator and artist, and the founder and director of Life Force Arts Center. She has an extensive background in dance, having performed with modern dance companies and taught dance, fitness and yoga for over 45 years. As a vocalist, she performs with her band Life Force Ensemble and has 3 CD’s to her credit. Joan uses vocalizing as sound healing, and teaches sound healing in her Shamanic Training Program.

Joan says, “I’m thrilled to be in The Angel and The Heretic. Britt and I have been friends and colleagues for years – she was my massage therapist, and among her many talents, she is the best bodyworker I have ever had. She has had many spiritual experiences since childhood, and is able to heal her clients at every level: physical, mental, emotional, spiritual.

Britt was a perfectly healthy young woman who got sick and was suddenly at death’s door. It was a very mysterious, debilitating illness – my understanding is that the doctors never did completely understand what it was. It was terrible to see a friend go through something like this. This went on from 2009 until about 2014.

During these years, I followed Britt’s poetry online, when she would post some of it on Facebook. She writes some of the best poetry I’ve ever read, bar none. This is world-class poetry.

When Britt told me she was having a  book of poetry published, I was so happy! I suggested that she create an Art Ritual for it, the type of healing rituals that are the signature events at LFAC. We have so many wonderful artists at LFAC, and one of our goals as an organization is to have artistic collaborations as a mainstay of our programming.

One of my jobs as Artistic Director is to be an impresario, to bring together people whose work can catalyze each others. That is exactly what is happening with The Angel and The Heretic! These Art Rituals give the artists associated with LFAC a place to shine, to experiment, to grow, to resurrect old talents they haven’t used, or to work with interdisciplinary art.

For example, I have known of Bart Smith’s work as a musician from LFAC’s Open Drum Circles (led by Cathy McManamon) but I never realized he has an extensive background in choral music, and composes music and sings. I know Mary Burton as a student in my Shamanic Training Program, and also as a visual artist who has exhibited in LFAC’s shows. She told me that she was also a musical artist, but The Angel and The Heretic is the first time Mary is performing music at LFAC (other than the sound healing we do in Shamanic Training.) Cat Dughi Fritz performed at LFAC as part of a group several years ago, but I really didn’t know her work until just a few weeks ago when she read the poems of Emily Dickinson for our Dead Poets Halloween Party. I was blown away by the level of craft and heart that Cat brought to that performance, and I knew she would do a fantastic job reciting poetry as rich and complex as Britt’s.

It is also so great to see Britt performing again – literally resurrecting her dance career. It makes me recall several times in my life I have come back to dance after thinking my dancing days were done. Resurrection is one of my specialties, both doing it myself and helping others to do so, too.”

Bart Smith: To create the music for this piece, I charted “motifs” throughout the collection as a whole (prayer, body, emptiness/stillness, dance, light, etc.). In addition, I wanted to be sure I used them in a way that tied one section of the ritual to the next.  Music for the poem “This” practically wrote itself. The poem “Descent” was easy to set to music, for example:  a descending melodic line, from B-flat above middle C gradually down the octave, and in a fairly speechlike rhythm.  But depending on the overall logistics of the ritual, it could serve either as communal chant or as part of an interlude for the actors and/or singers, so those choices needed to be made.

An idea for one of the interludes was for the women to maintain a sung “Oh . . .” in unison with the droned A of my singing bowl and to improvise small bits of rhythms and vocal movement away from that pitch, based on the movement Britt was doing, but to always return to their own droned A so that someone is always intoning it.  I can also “rough up” the singing bowl’s tone in passages where Britt’s movement seems more animated/agitated.  Elsewhere, we had to make decisions about what text the performers would sing/chant during the movement interludes, including any silences, and the kind or tempo of any rhythmic drumming she wanted during them.

Mary Burton is a multi-talented artist, whose artwork Bastet and Spirits,Saints & Angels is featured in the current LFAC exhibit The Spiritual Power of Art: Myth, Religion & Mystical Experience.  A graduate of Life Force Arts Shamanic Training Program, Mary has an M.F.A. from the School of the Art Institute of Chicago, as well as extensive experience with music, having studied choral singing, voice, songwriting and composition since high school. Her teachers include John Sparks at New Turners, composition lessons with Jason Roebke through DePaul Community Music, and world music with Ben Harbert and Ustad Aashish Khan   She has composed songs, instrumental pieces and music for chorus.

Mary says, “I am deeply honored to be part of this event. I feel The Angel and The Heretic is an art ritual of great depth. In the rehearsal, I felt as if I had I stepped into an ongoing story of healing that is without beginning or end.  Taken from the pages of Britt’s life and made into a journey, I was struck by Britt’s dancing and presence.  I could have been at an Episcopal High Mass or a faith healing, or both.  As a composer, Bart’s music is a pleasure to sing, elegant and beautiful.

In the rehearsal for the Art Ritual, Britt described her poems as each one being like a bead in a mala (necklace) to be experienced and visited again.  This is truly a healing and cathartic journey, an art ritual that sets a high bar to follow for future Art Rituals at LFAC.”

Get to know “The Angel and the Heretic”

More Information on The Artists