The Creative Side of Tarot 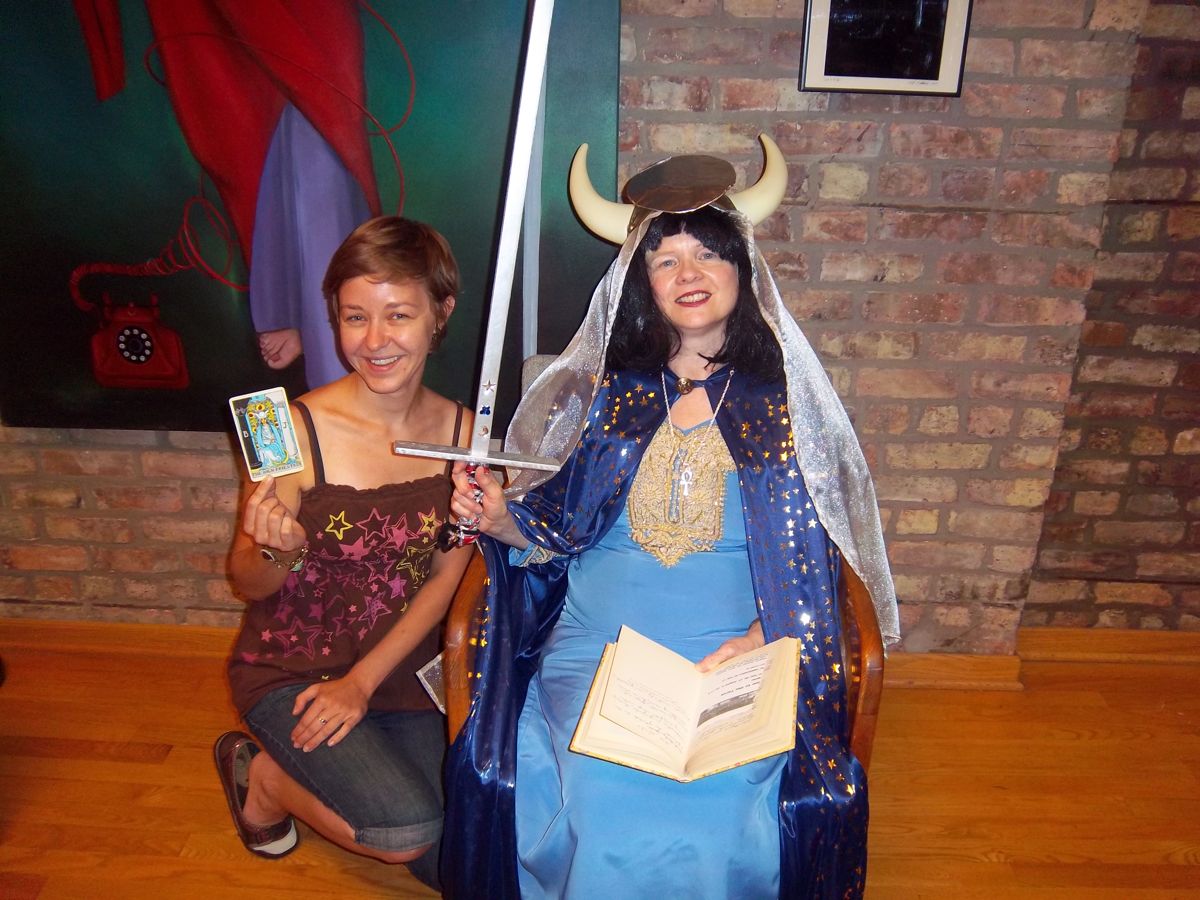 April Wagner (l.) with Mary Hobein dressed as the High Priestess
by Liz Baudler – In April Wagner’s Introduction to the Tarot class, the tarot is not only a tool for divination, but for inspiration. April has offered these classes several times a year, to glowing reviews. “The way she teaches is very logical and systematic,” says one of her students, Jennifer Berman, “but she also allows you to access your intuition.”
April’s students are given an intensive-four week grounding in the history and methods of the tarot, but what is most important is a student’s individual connection to the cards and how they understand them. For a final project, April asks her students to create their own representation of a Tarot card. And for those who, like Mary Hobein, say they “can’t even draw a stick figure,” no worries: it doesn’t have to be two-dimensional and paper.Projects have ranged from jewelry to computer animation to, in the case of Jennifer Berman, a pan of brownies topped with chocolate coins. (Sadly, no photos of the brownies exist, as they were all devoured quickly by an ecstatic class). Signifying the Queen of Coins, Berman wanted  the brownies to represent the sense of hearth and home this card gives her, and also experiment with different kinds of baking.
Mary Hobein went one step further and turned herself into a tarot card: the High Priestess. Each part of Mary’s costume symbolizes part of the High Priestess’s meaning.  “One of the main things about the tarot is the symbolism of the pictures,” she explained. The sword is for strength, the book for wisdom,and the headdress invokes Egyptian mythology. Mary, finding that neither representation of the High Priestess in two traditional decks gave her quite the sense she wanted, decided to combine the Arthurian and the Rider-Waite decks for a whole new feel.
Both Mary and Jennifer do not make any claims to being artistic in the pen-and-paintbrush way. Instead, both drew on other talents and past experiences. Jen is a former pastry chef, and Mary has spent time acting and as a priestess. Therefore, she barely had to buy or make any parts of the costume, except for the headdress.The personal connection both women had to the card and the project is apparent. “It’s hard to learn every single card, you learn them after years,” Jen says, “But I was really inspired to think of creativity in a different way.”
Even April herself brought her own project, several haikus based on tarot cards, toher last class, though she says she’s not a writer. Perhaps, though, as a tarot card, she would be the Hieorphant, a teacher, leaving her students with new knowledge and confidence in their creativity (and delicious brownies).

Being thrown in the pool

but where is my wallet?

glued to the television.

Who knows what happened.

She’s got my back

down Southport Ave and Clark
Wilson’s the homestretch.

In her relatively short life, Liz Baudler started one magazine, The Toucan Literary Magazine, and helmed another, Pantheon: A Journal of Spiritual Art. Currently Liz has turned her piercing if spectacle-enhanced gaze to book reviewing and literary commentary. She is the Senior Editor for the upstart literary media site Chicago Literati, writes for Examiner.com as the Chicago Memoir Examiner, and blogs for the Jet Fuel Review.

Liz’s prose has been published in The Q Review, Feathertale, Chicago Literati, the Story Week Reader, Toasted Cheese and Half Nelson; her poetry in Catapult to Mars, and Indigo Rising, and she’s read in many Chicago reading series. If that weren’t enough, you can find Liz eagerly volunteering at literary events around the city such as Story Week and Sappho’s Salon. She is a proud 2012 graduate of Columbia College Chicago’s Fiction Writing Department, where she tutored students, edited their literary magazine, and was vice president of the Fiction Writing Student Board.