The Kaitseja and the Noid by Colleen Koziara 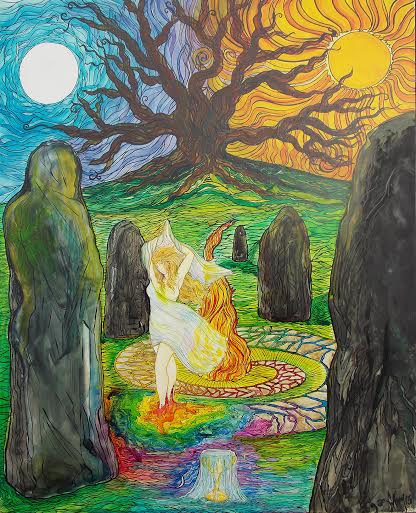 The Kaitseja and the Noid (c) Colleen Koziara

This is the story of the Kaitseja and the Noid. Kaitseja is an Estonian word that means Guardian. Noia means Witch; Noid means Witches. The Kaitseja is the Witch’s guardian. Paired forever since the beginning of time by their mother and father the Moon and the Sun, they return over and over again lifetime after lifetime. She always walking the path of challenge and magic, he always standing strong and sure as her guardian and protector, her love and her shield, the one thing that no matter what, will always be there for her to return to. Theirs is a story of connection beyond time and space or even form. It is a story of eternity.

Once upon a time, there was nothing and everything. The Wholeness. Täielikus, which means, The totality of divine manifestation – The Full. Täielikus looked upon itself and became so enamored of its own reflection that in a moment of pure ecstasy, with the force of all creation and discovery, Täielikus uttered the first sound, the first song. A note of such pure joy and power that the All shattered and became everything. Two were formed from the one. Two…to love and care for the Wholeness. The Sun and the Moon.

The Sun and Moon looked upon the Earth and the love they felt for each other and all flowed forth in their Song. The song caused the Earth to spin, day and night to follow ever in order and change to bring Life. Life was a magic so great that it astonished even the Sun and Moon with its wonder. Even more astonishing was when Life joined in the Song. With each new voice the Song grew.

The Song contained all the knowledge that Life would ever need to flourish. Even the humans could find all they needed to know within the Song. The Song continued and all was well.

But change happened faster and faster. While the song seemed to calm and bring peace to the trees and animals, the elements and the plants, the people were changing so fast, developing into something so new, that the song was too big for them. They could not take it all in. They could not hear all the lessons as the rest of Life did.

The Sun and Moon pondered this. They loved Life and thought of it now as their child. They loved all of Creation, Täellikus. Now the humans, who called themselves The People, were born of the Sun and the Moon, their Father and Mother. Some of the people heard the warmth and power of the Sun’s song more easily. Some of the people heard the cool silver words of the Moon’s song better. Depending upon which song they heard their lives changed. The people who heard the Mother’s song were the Women. The Men heard the Song of the Sun. So it had been for many ages. The lives of men and women, their cycles and way became those of the Sun and the Moon. The ages continued to pass and with time, though the men and women were still connected to the cycles of the Sun and the Moon, they forgot why. Fewer and fewer heard any of the Song. Even fewer understood its lessons and let its music play through their lives. Those few people became very special.

The Noid remembered their lives, but like the rest of the people always returned life after life in human form. Not so the Kaitseja. The Kaitseja remembered their lives as well, but possessed the very strength of Father Sun within them and so each Kaitseja would choose to return to life as the part of the song that the people needed most to learn.

The Kaitseja came filled with Father Sun’s strength and flowing with Mother Moons magic, and balanced each within themselves to return as the stones of cave and cliff when the people needed shelter; as the wild plants when it was medicines that were most needed. As grains for food, or the wild ones of forest, field, water or air when meat, clothing, guides and companions were the greatest need.

Magical and wondrous as this ability was, the Kaitseja led a lonely life. Always transforming, always giving of their very life to protect the people, they were always alone. Always powerful, always wise, but always without companionship.

The Noia, always coming as one of the people were there to help the people learn. They too balanced the songs of Moon and Sun, Mother and Father within themselves. Within them the Song of the Mother, of darkness, movement, wisdom and patience, the sounds of joy and birth and death were balanced with the strength and perseverance of the Father and his intent to carry through always, without wavering or fail.

While the Kaitseja shifted shape, the Noia interpreted. They knew how to teach the people to hear the Song that the Kaitseja helped give voice. Always coming in human form you would think the Noia would have companionship, but alas, this was the farthest from the truth. For while they knew much and were always the teachers, the people were often afraid and in awe of their knowledge and avoided them. So the Noia too, were always alone.

The Kaitseja and the Noia became the favorite children of the Sun and the Moon because they were able to hear and feel the love in the Song and then sing that love back to the Sun and Moon. But to see their favorite children so often alone and lonely made Father and Mother very sad. As they moved through the long ages of time, the Noia and Kaitseja came to spend more and more of their time with each other, so that neither would feel so alone.

Over the long ages of time, the Kaitseja and Noia became so familiar with the magic of the other, that they formed unbreakable bonds and sought each other out again and again, in each successive lifetime. In this way, they were no longer alone.

The Noid cut down the Kaitseja where he stood as golden wheat and wove him into crowns for her hair so that as she taught the people of the Harvest Magic, he could whisper in her ear of his last season’s adventures.

The Noid sought the Kaitseja in the forests where they stood as tall trees, left offerings in his roots, and played and sat among his branches sharing her stories, her touch and her time with him while he stood sometimes through several of her lifetimes.

The Kaitseja, when he came as a small wild one would seek out his Noid and live with her whenever he was not running, swimming or flying free.

The Kaitseja, standing as Stone sentinels marking time upon the great wide plains would call to his Noid to come and dance safely within his shadows, and she would bring to him there as he stood unmoving, the gift of the Song brought to life in movement… and every once in a very great while, if her dance was especially wonderful and filled with love, it would reach his heart and even though he was stone, he would rise up and join her in the dance…

Colleen Koziara (Mystical Willow Productions) grew up in northern Wisconsin on a farm, on an island. Seeing the magic of nature and the stories that it told filled her with a childlike sense of wonder. Colleen’s work intends to capture a moment of magic either from the natural world or from an ancient legend or tale, and speak of the “secret” beauty within simple everyday moments and objects. Colleen strives to make each of her works a doorway through which the viewer may journey. Colleen attended the American Academy of Art in Chicago, and has illustrated more than 20 books. A Reiki Master and Ovate member of the Order of Bards, Ovates & Druids, she has been presenting, writing and providing art for Circle Sanctuary since 2002, and designed the Pagan Spirit Gathering logos for 2010-2014.  Colleen does private art instruction from her home for all ages; Body Art; Custom Tattoo Designs; Visionary Art; and Commissioned pieces manifested from the visions and dreams of her clients. Colleen works extensively with Elders and is an award winning designer of programming for seniors for organizations such as the American Society on Aging and International Council of Active Aging. Colleen has two works of art in The Human Spirit exhibit: Soul Song and The Kaitseja and the Noia. Join Colleen on April 11, 2015 at Life Force Arts Center when she will present her story and painting “The Kaitseja and the Noia” at Painting With Words: An Evening of Poetry, Storytelling & Spoken Word based on “The Human Spirit” exhibit with Sally Cooper, Kurt Fondriest, Colleen Koziara & Kao Ra Zen