The Tree’s Tale: An Excerpt from The River Goddess by Valentine Riddell 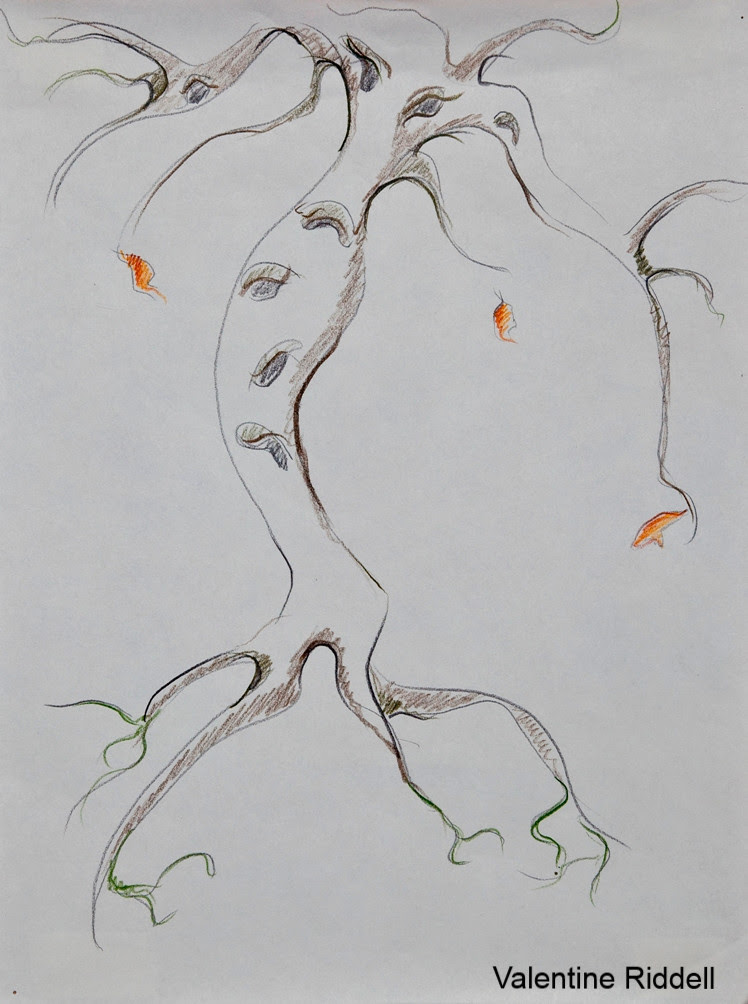 The tall Cottonwood that lived at the corner of DeVargas and Galisteo streets wasn’t in its place when it noticed Owl’s truck pull up to the curb—it was down by the acequia sipping water from the ice melt.  Hastily it bounded back up the hill, landing with a jolt that dislodged a small piece of bark, and settled its branches.  It would never do to miss the Greeting—a simple ceremony but one that held great meaning for both the Cottonwood and Alyssa.  Besides, it had something important to tell her.

Alyssa jumped out of the truck, leaving Heart to struggle with the parking meter, and ran toward her old friend.

“Tree!” she murmured affectionately, giving it a fierce hug.  “How are you?  Isn’t this weather great?  Aren’t you glad it finally stopped snowing?  Spring’s almost here, and then you can put out your little green buds, and—”  She suddenly spied the piece of bark lying near her foot and bent down to pick it up.

Heart had reached the tree and took the slab of bark from Alyssa, examining it carefully.  “You’re right, there is.  Looks like hieroglyphics, doesn’t it?”  She handed it back to her daughter.

“Writing with pictures.  In ancient Egypt that was how they recorded all their history.”

“Wow!  You mean everything that ever happened to them was written in pictures?”  Alyssa was amazed.

“Yes—on a kind of paper made from a water plant called papyrus.”

The girl looked again at the bark, while the Cottonwood, intrigued, leaned over her shoulder.  Sure enough, there were the marks, not writing exactly but more like tiny figures.  Darker gray-brown against a mottled surface, there was a curving, elongated feminine form bending away from a tall straight one, and beside that a little pointed form over which floated a heavy oval that reminded Alyssa of a cloud.  Then beyond that a menacing hooded shape bent toward a cowering animal, and a little apart from them, a long slender form lay prone.  These “figures” could have been people or trees, except for the animal, which looked like a dog.  She traced each one slowly.  A little shiver raced up her spine to raise the hair on the nape of her neck, and she looked up at her mother, alarmed.

“What makes you say that, dear?”  Heart was used to her daughter’s love of drama and tended to take most such announcements lightly.  Besides, she thought, looking at the sun, it was close to three o’clock.  They had to meet Owl at the gallery in half an hour and she wanted to pick up his proof sheets at the printer’s first.

“I don’t know what, exactly.  But something.  I can feel it when I touch this bark.”

“Well, what sort of something?” Heart asked patiently.

“Something…something…” Alyssa screwed her eyes shut, then remembered the River Goddess’s teaching and relaxed, letting the images dance behind them until a message emerged.  “Something’s happening with the trees.  But I can’t tell what.  And it could happen to us, too…something bad!”

Heart looked at her daughter, measuring this dire prediction against her own common sense.  Regardless of whether or not she believed Alyssa, there was no way to deter her.  Once she got a notion into her head she’d track it like a hunting cat until every piece of the puzzle fell into place.

“Tell you what.  I’ll go pick up the proofs and meet Owl, and we’ll have a cup of coffee at that café by the gallery.  You stay here and sort this out, and come on down in about forty-five minutes.  How’s that?”

“Mmmhmm…”  Alyssa had settled cross-legged by the cottonwood with the piece of bark firmly in hand and was studying it intently, oblivious to her mother’s departure.  Heart walked briskly away, shaking her head.

“What do you think?”  Alyssa looked up at the tree’s bare branches, moving ever so slightly in a little breeze.  “Is this something that’s happened to you?  Or to some other trees?”

The Cottonwood sighed.  It was so hard to tell whether humans could understand everything they needed to.  Here was this bark, for example—an encoded message rather like a prophecy—and the girl thought it was something that had already happened.  Well, there was nothing for it but to do one’s best.  She had leaned back against its trunk—a rather pleasant sensation, the warm bark of a human against one’s own.  The tree liked that, and it liked this girl.  It concentrated on sending a clear image of what the glyphs meant into her mind.

Alyssa straightened up abruptly.  “This isn’t over yet, is it?” she demanded.  Again the tree sighed, this time in agreement.

“We could do something to stop it?”  The branches rustled gently.

“Where…” she began, and then an image of the aspen grove at the base of the ski bowl flooded her mind.  Only the trees were not standing tall and proud as usual, stark against the snow.  They were bent over, like the feminine figure in the glyph, and several were lying prone.  A few tiny young aspens were still upright, fiercely defensive, but the black cloud that loomed over them seemed to be raining down some kind of poison, because there were also animals and people who had fallen, shrinking away from an ominous figure in a hooded cloak.

“What is it?” she breathed in horror.  The cloud began to shoot lightning bolts at the stricken people, animals, and trees.  The Cottonwood shuddered against her back and whispered something indecipherable.  Suddenly Alyssa couldn’t stand it any more.  She scrambled to her feet and gave the tree a reassuring hug.

“Please don’t worry,” she murmured.  “I don’t know what this is, but I’ll find out.  I promise.”  She wrapped the piece of bark carefully in her jacket and ran down the street to the café where her parents waited.  Worried, the tree watched her go.  It had carried that message for years, waiting for the right moment and the right human to give it to.  Somehow it had always envisioned a sensitive adult.  This young girl—but then, even a child was better than nothing.  If only it weren’t too late!

McKay-Riddell, V. (2010). “The Tree’s Tale,” excerpted from The River Goddess & Other Stories. Bloomington, IN:  AuthorHouse.

Dr. Valentine McKay-Riddell holds a PhD in Transpersonal Psychology and a Master’s degree in Counseling Psychology from the Institute of Transpersonal Psychology (ITP) in Palo Alto, California, and a BFA in Painting and Sculpture from the San Francisco Art Institute. She studied Creative Writing, Education, and Child Psychology at the University of Texas in Austin; Painting and Sculpture at the University of Nebraska in Omaha; Psychology at St. Mary’s College in Orinda, California; and Arts and Consciousness at John F. Kennedy University, also in Orinda.  Valentine is Founding Executive Director of Orenda Healing International.  Born in Orlando, Florida, she has taught art-making to young people and adults since 1965, and Healing Art© – a shamanic art-making process she developed in 1984 to heal herself of cancer – to AIDS and cancer patients; incarcerated, homeless, and challenged youth; developmentally disabled adults; and women in transition in Texas, California, Oregon, and New Mexico. She is a certified Reiki Master in the Usui Lineage.