by Calaj (Janet Trierweiler and Matthew Schaefer) – As artists and kindred spirits both working in contemporary painting, we created Calaj, a collaborative art duet in which we create artwork together. Five years into our duet, the commitment to painting together has unfolded from initial unknowing to a conscious emergence of relationship in its essential nature, harmony, wholeness, radiance, beauty, happiness, life.  Within the partnership, we discovered many artistic and meditative processes that opened new pathways of creating art.

Beauty emerges when we let go of the stories of our unresolved,veiled history that block the passageway to the conscience. Step by step, each series of our painting evolution brought us to a ritual process, unveiling our defenses which keep us from clarity. In order to respond from our conscience, the source of knowing, we maneuver in accordance with these karmic shields, using the fuel they hold to create the paintings.  Sharing the craft diffuses the power of the identity, enabling through humility, defense to emerge as a positive source of energy.

The following comes from the journals we kept as we evolved our process of working together.

From Process to Ritual

As kindred spirits, we wanted to paint together.

Coming together through a recognition of a strong similarity in our painting techniques, we shared a love of process and the physically energetic Abstract Expressionist style. This process, a high energy, impulsive expression of the unconscious involved freely extracting and adding until we felt the painting “worked”.

An idea of collaboration came to Matt when he first arrived in Chicago from the backwoods of New Hampshire.  Seeing a particular graffiti strewn wall on an old brick building, he noted how each mark made in earnest, angst and disregard, juxtaposed to the faded commercial signage, created an unrestricted explosion of energy.  There were many forms from many sources but placed on this wall, they came together as a mysterious communion of wholeness, harmony and radiance.

Meeting on Monday nights to work together on the same canvas we began a collaboration.   With no rules, each taking a turn applying their mark, we started. Alternating between two large paintings we soon discovered that we were having trouble coming to a resolution.  There seemed to be no way either one could feel satisfaction or completion unless having made the last mark. At this point, we allowed the paintings to go unfinished with their many layers from our many attempts. After many years of working together, we renewed our interest in these first paintings which with fresh eyes, we came to understand as not only finished, but also well integrated and exciting work.

We continued our artistic relationship working independently yet in a similar style and on the same size canvas’, 32”x32”. Producing many paintings lead to inspired conversations and recognition of a shared philosophy. Giving and receiving each other’s thoughts and ideas freely, raised our awareness through that act of humility.  Using new knowledge gained through this awakening, we were able to decipher the essential steps of our painting process. We realized we could use these tasks or steps, even the mundane, as a means to open consciousness.  We created a ritual around these steps, a predetermined path, freeing us from judgment, allowing our feelings to be directed and directly related to what we’re doing. With each step we become more present with our feelings. The feelings are then transformed into a physical expression, fueling the impulsive act of the technique.

Not addressing judgment insures that our painting experience is authentic, unrelated to the effects of the act.  This final step of the process, “the walkaway” comes after the last paint stroke is executed. The energy, extending beyond the perimeters, leads to the “walkaway”.   The “walkaway”, turning away without judgment, entrusts the material outcome to the spiritual process.

At this point, still working independently, we began to bring our paintings together for criticism.  Seeing the strong similarities, we discovered the possibility of joining the canvases together as a dypticht, creating a random whole.  Carrying the idea of random into the next phase, we created a lottery loosely based on our common interest in the I Ching, the ancient Book of Changes and it’s paradigm of creative transformation.  This lottery technique left to chance, the pairing and orientation of the paintings opening a creative dialog with the unknown.

As our new skills and knowledge developed, our work became more and more compatible.  Once again we decided to paint together. Taking two canvases of the same size and attaching them, not aligned but offset or jogged, as in a T, our object was to integrate, each one taking a side but together seen as a whole. This jog represents and is an obstacle, creating the opportunity for harmony and wholeness.

Each sketching out a completed work for one of the two canvases, with locations, destinations and arrangement of forms, became part of a new collaborative ritual.  We discussed these sketches at length, turning them until a complimentary orientation was achieved which reflected the geometric positioning of the connected canvases, blueprinting our plan for the painting. The paint is then specially prepared to best express the impetuous nature of the human spirit and the organic destination of the medium.

Although the ritual had  begun independently, when it was brought into the new realm of the collaboration, painting together, it ceased to be a casual event and became a strict practice with each watching over the other and together watching over the painting.

The strengthening of the ritual created a clear method for suppressing thought by engaging observation.  We called this method “the workmanlike way”. Purposely assigning our attention to the steps of the ritual diminishes the power of the ego.  With the ego breeched, chaotic energy is released and separated from the stories that created it, transformed to a vital source used to fuel our intention.

Differing from the previous series where each took a side and worked out our own composition using an unrestricted number of forms, we now worked together as a single artist, both seeing the two connected canvases as one open field.

Further investigating the relevance of integration, we reduced the number of marks to two, one each, with the intention of creating wholeness, not just union. This simplification deepened our awareness of the moment and our understanding of the forms as a moment caught on record. Our focus now is being the vehicle and releasing unconscious chaotic energy, transformed to the canvas, working with nature’s forces to decide the final placement and integration. An exhibition of our collaborative paintings, “Between You and Me”, at Gallery Uno in November of 2012, created the opportunity to construct an on-site sculpture. The gallery is small, yet highly visible with large windows on two sides and one prominent exhibition wall.

To begin the installation, we chose a painting that had been an exciting turning point in our work, placing it high on the exhibition wall. At the foot of the wall, extending into the gallery, a white drop cloth, 6’x9’, defined the workspace for the sculpture.

We chose as building material, colorful sticks that had been used for mixing paint. We liked the elemental quality of this material and having a large quantity available made this a good choice. We supplemented our supply with sticks of unpainted raw wood.

To keep the process fluid, we used two hot glue guns to connect the paint sticks, making spontaneous decisions possible by the rapid setting of the glued connections. We worked simultaneously, yet independent of the other. Making the effort to bring our full awareness to the attachments created a meditation.

This meditation opened a peripheral response to the ongoing construction. Working during business hours in the highly visible space, our intention was to use the construction as a performance or “action” as well as a sculpture. To commit to this “action” we did not respond or react to the onlookers.

Within the prolonged duration of each work session, we allowed the structure to grow organically, without personal input into size and aesthetic. After several work sessions we recognized the sculpture’s spiritual connection to the painting and an overall sense of harmony, feeling that we had reached a conclusion. At this conclusion the structure had reached over 6ft.

It was our desire to take the lessons learned in the paintings into a three dimensional project. The lessons challenge our expression and skill as well as using the fluidity of the medium to express the natural order of the random. The origin of the random, the forms, are done with an emphasis on precise workmanship. The attachments in the sculpture become a meditation, taking all of our attention away from the outcome, diverting our mind from preconceived aesthetic decisions. We discover in this process, an organic partnership between our skills and a higher order.

The disciplined practice of the techniques we have developed manifest an illusive world within the canvas.  This other world, or volume, draws us into an unfathomable perspective.   In this ungrounded state lies an experience of refreshing vulnerability and psychic relaxation.

Our desire is to bring this state of mind, this soft gaze, to life, inviting the natural occurrence of an ambiguous perspective into our paintings. 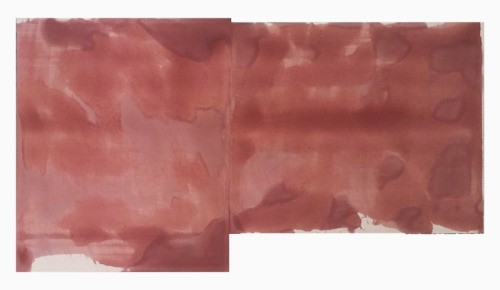 Calaj is the collaborative art duet of contemporary painters  Janet Trierweiler and Matthew Schaefer, an artistic pairing sharing philosophical discoveries, technique and process. Their practice includes abstract, figurative and conceptual ideas.  Their collaborative work, Calaj, is represented by Gallery Uno, Chicago/Berlin.  As individual artists, Janet and Matthew have exhibited at numerous galleries and shows throughout the Chicago area. They are faculty artists at Evanston Art Center. Calaj’s work has been featured in several Life Force Arts Center exhibits including “Spring” (April 11 – May 29, 2013) and “Life Force Wheel: The Witness & The Artist” (January 31 – April 8, 2014)