Hathor, Mistress of Music and Dance by Mary Burton 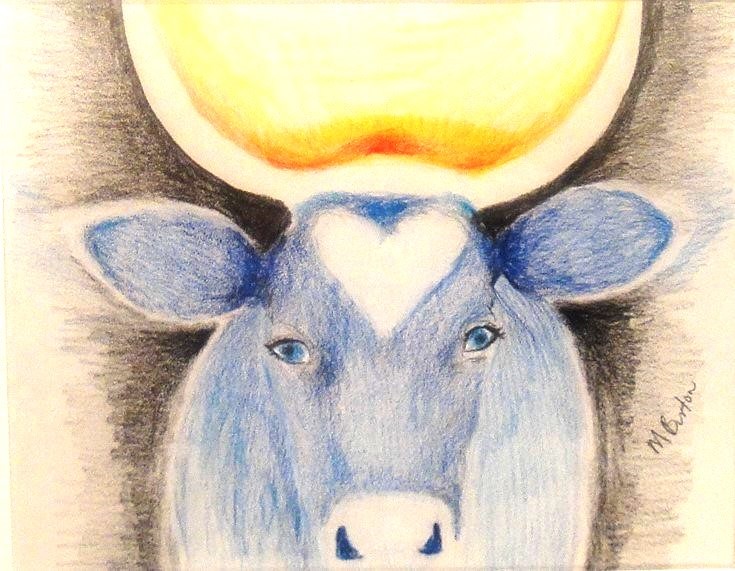 As an artist, I find inspiration from many sources.  I was drawn to the image of the Goddess Hathor and did a number of artworks devoted to her, two of which are in the show, Art: The Language of Healing, at Life Force Arts Center (LFAC).  As I drew those pictures and prepared for the ceremony associated with the artwork to be presented at LFAC, I learned a lot more about the Goddess than I had known originally.  My appreciation and awe has grown for this vast Goddess.  This has been a wonderful learning process.

Hathor (Greek; Het Heret and Het Heru are the Egyptian variations of her name meaning “house or mansion of Horus”) is a goddess from prehistoric times.   An ancient Cow Goddess of the Milky Way, her worship grew to absorb many regional goddesses and their attributes throughout Egypt and beyond.  She was known as the “Great One of Many Names,” among them the “Mistress of Music and Dance”.  Art, music, and dance were her sacred arts.

Embodying joy, love, beauty, motherhood, fertility, and pleasure, she was worshiped by men and women of all classes but particularly revered by women who sought her blessings in their roles as lovers, wives, and mothers.  She was the wild cow of the marsh who protected the baby Horus from his uncle Set.  She encouraged celebration and free spiritedness in her devotees.  Her anthropomorphic representation was often a woman with the red sun disk and uraeus between cow horns.  She was the “Eye of Ra,” upholding the Sun between her horns.  Sculptural representations show her head on the tops of temple pillars, her little cow ears peeking out from the famous “Hathor” hairdo. 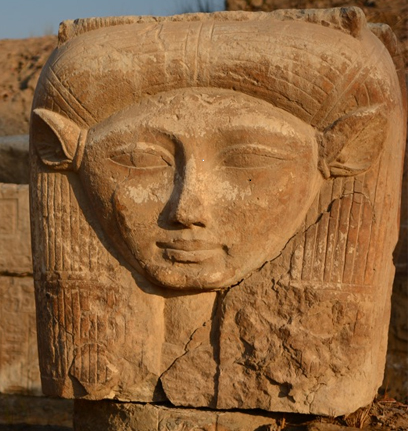 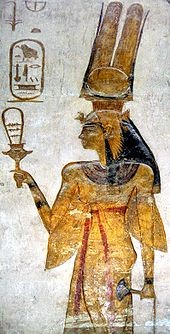 Over time, Hathor the wild cow goddess, free in the marsh, devoted to joy and pleasure, was eclipsed by Isis, whose story of suffering, perseverance, and loyalty was likely more in line with the expectations for women as Egyptian culture became more Hellenized and then Romanized.  According to Leslie Jackson, as women became less independent, the Goddess Isis absorbed the attributes of Hathor. Hathor, in turn, had absorbed attributes of previous goddesses. Hathor remained her own, separate divinity as Isis’ prevalence rose, but she was a much-diminished deity within the Egyptian pantheon. The peoples’ resonance with Isis’ suffering (briefly, her story includes the murder of her husband Osiris, his resurrection by Isis’ magic only to lose him again to the underworld, and raising and protecting Horus as a single mother in the marsh), Isis became universally beloved by all, but especially slaves, sinners, artisans, and the downtrodden. She served as a precursor to the Virgin Mother Mary of Christianity.

Today, there is a certain place and need for the joy of Hathor.  Growing up in the 1950’s on a dairy farm in a rural, Anglo-Saxon, heavily Protestant area of upstate New York, I wonder how my early life might have benefited from a connection to Goddess Hathor.  I wish we could have had Hathor’s wildness and joy to help counteract the rigid expectations for women and men.  Holsteins and other types of cows lived on our farm.  My work “Blue Cow Hathor” in the show at Life Force Arts Center, Art: The Language of Healing, is my dairy farm past revisited with the blue sky goddess.

The other work in the show, “Hathors,” is a meditation on the Goddess Hathor as two maidens and a milky white cow representing stars of the Milky Way.  Here, Hathor heals as she dances in a red dress, an aspect of another Egyptian goddess. Sekhmet.  Red is the color of life, passion, and blood.  As a cow, she provides pure white milk, beauty, and nourishment.  She is the original mother. 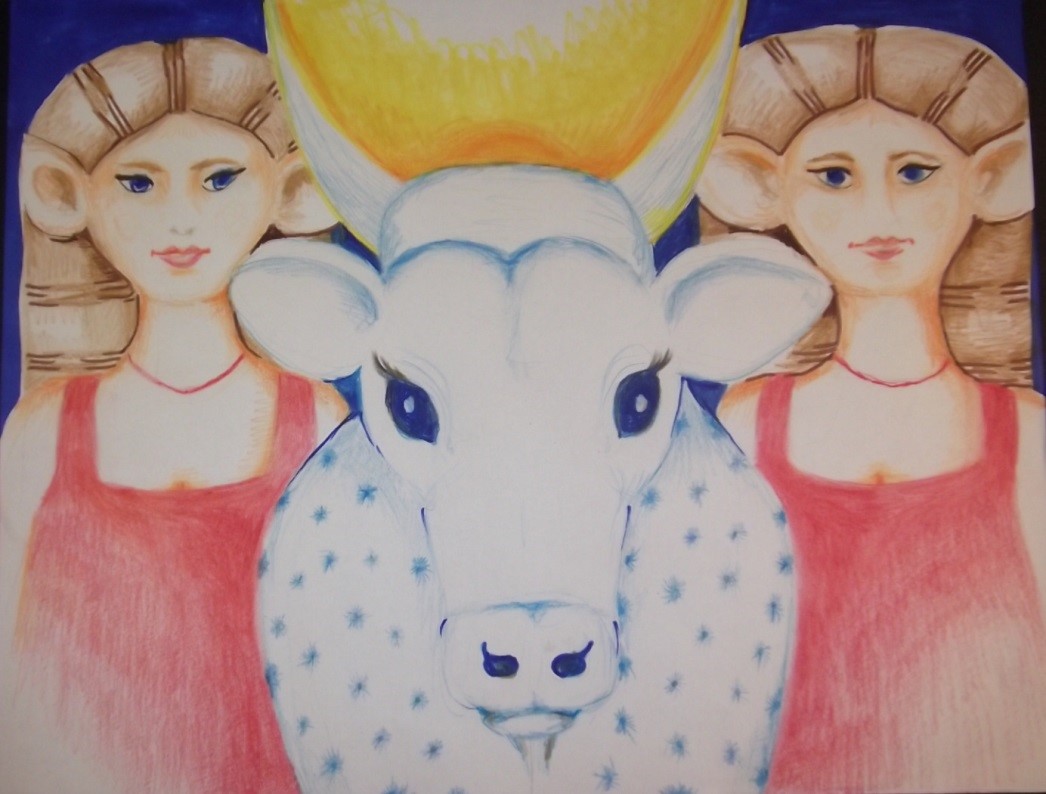 I am drawn to the Egyptian Goddess Hathor because she reminds me that I need to heal and be healed, to connect with ancient power in order bring it into the now. How can Hathor help us now, living in Chicago, far away from grassy fields?  How can we nurture and heal ourselves and others in the challenges we all face, keeping ourselves healthy and sane with good food and habits?  We can ask Hathor for guidance.

About five years ago, I came across a picture of a Hathor statute in The Ancient Secret of the Flower of Life by Dunvalo Melchizedek. Not only the picture, but the lessons within the book opened my mind to the Goddess. “Though they [the Hathors] were not from Earth, in the ancient days they were always here to assist us in unfolding our consciousness. They loved us dearly, and they still do. As our consciousness became more and more third-dimensional, we eventually could no longer see them or respond to their teachings. Only now, as we grow, are we beginning to communicate with them again” (Melchizedek 278-9).

Ancient songs and prayers to Hathor resonate with the love and devotion she was accorded:

We propitiate Your Majesty every day.

Your heart rejoices at hearing our songs.

We rejoice when we see You, day by day.

Our hearts are jubilant when we see Your Majesty.

You are the Lady of Garlands, the Mistress of Dance,

The Lady of Unending Drunkenness.

We rejoice before Your face; we play for Your Ka.

Your heart rejoices over our performance.

New songs and prayers to Hathor are still being written today by devotees from modern pagan traditions who have rediscovered Hathor.  Some of these prayers will be utilized in the ritual in her honor to be conducted at Life Force Arts Center on August 11, 2017.  We will seek her blessings in her role as the Mistress of Music and Dance, arts sacred to her. Our offerings will include joyous music and dance, rattles and percussion instruments, incense, an altar set up with mirrors for beauty, milk and figs, and wine and beer. We will drum, clap, dance, and sing for Hathor. She will be most pleased! 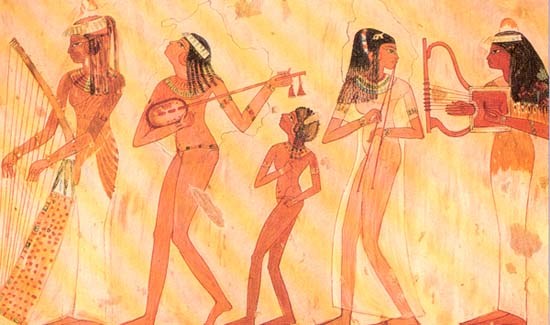 Picture of musicians from James Putnam’s Egyptology: An Introduction to the History, Culture, and Art of Ancient Egypt. From left to right, large boat-shaped harp, lute, dancing girl, double oboe, and lyre.

Mary Burton (B.A., SUNY Albany; M.F.A., School of the Art Institute of Chicago) grew up on a farm in upstate New York where she was blessed to be immersed in the beauty of nature and life forms.  Observations of light and dark, trees, the seasons and natural phenomena as well as an ongoing quest for meaning inspired explorations of form and line in drawing, printmaking, painting, videography and video image processing. A lifelong searcher and student of mysticism and spiritual sciences, her studies include comparative religions, mysticism, yoga philosophy, and spiritual astrology. She is a graduate of the Life Force Arts Shamanic Training program.  Mary’s artwork has appeared in many exhibits at Life Force Arts Center. Mary’s family has been in what is now the U. S. since the 1600’s. Her ancestor, Mary Bliss Parsons, was accused and acquitted twice for witchcraft in Cambridge and Boston, Massachusetts.

Mistress of Music and Dance, http://www.hethert.org/musicdance.htm

Invocation to Hathor, The Isis, Lotus of Alexandria Lyceum © 2004 – 2017 by Linda Iles, https://sites.google.com/site/isislotusofalexandrialyceum/invocation-to-hathor

Melchizedek, Dunvalo, The Ancient Secret of the Flower of Life, Volume 2, Light Technology Publishing (May 1, 2000)